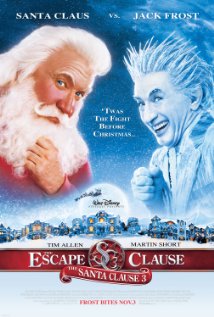 Mrs Claus (Elizabeth Mitchell) is about to give birth and it’s almost Christmas time, a very busy time of course for Santa (Tim Allen). Carol Claus is also emotional at the prospect of becoming a mother and misses her family. Santa is under a lot of pressure and devises a ruse for bringing her parents to the North Pole by disguising it as Canada and thus not breaking any Santa secrets. To add to Santa’s troubles, an emergency meeting is held by the Council of Legendary Figures to discuss what to do with Jack Frost (Martin Short) who has been unashamedly promoting himself and trying to upstage Santa. The Council wants to expel him but he begs for another chance and Santa takes him on as an additional helper.

The dastardly Jack Frost however, has ambitious plans and sets out to sabotage Santa’s efforts to get presents ready in time for Christmas. He discovers that there is an escape clause to being Santa and tricks the overstressed Santa into invoking it. Jack Frost assumes the role of Santa and turns the North Pole into a ghastly theme park. Meanwhile the real Santa, who has returned to a miserable life as Scott Calvin, has to devise a way of putting things back the way they were.

Children in this age group may also be disburbed by the above-mentioned scenes.

The apparent family breakdown between Scott (Santa) and his son Charlie could concern some children in this age group.

The main messages from Santa Clause 3: The Escape Clause are that good eventually wins over evil and that pride comes before a fall.
Values in this movie that parents may wish to reinforce with their children include:

This movie could also give parents the opportunity to discuss with their children the importance of spending time together as a family.