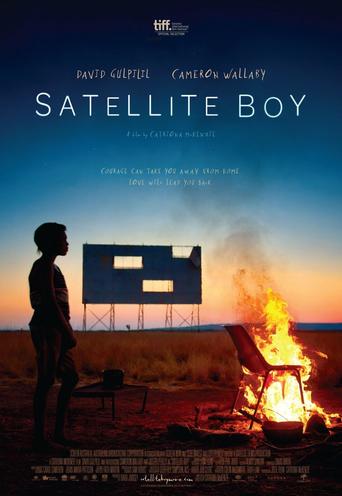 Satellite Boy tells the story of a twelve-year old Aboriginal boy named Pete (Cameron Wallaby), who lives in an abandoned outdoor cinema with his grandfather Jagamarra (David Gulpilil) in Kimberley. Although his grandfather lives by the traditional ways, Pete dreams of his mother returning from her hospitality course in the city and of them opening a restaurant together.

When a construction company informs them that they must vacate the cinema because the site will be used to build storage containers, Pete decides to travel into the city to plead their case. He takes his best friend Kalmain (Joseph Pedley) along for company.

Over the course of their journey, the boys are forced to live off the land in order to survive. Despite running out of food and water, taking many wrong turns, and needing to evade the police, the boys make it into the city where more adventures and challenges are waiting.

Children in this age group are likely to be scared by the above-mentioned scenes.

In addition to the above-mentioned violent scenes there are some scenes in this movie that might disturb children aged five to eight, including the following:

Satellite Boy is a heart-warming tale of one boy’s determination to protect the place he calls his home. Over the course of the film, Pete realises that his cultural roots mean far more to him than he ever imagined. He learns the value of the survival skills his grandfather taught him, and that the appeal of the city is somewhat transient. While the film touches on some of the darker issues affecting indigenous youth, the uplifting ending – with Pete fully embracing his cultural heritage – demonstrates the growth and transformation that people are capable of undergoing.

The film shows the consequences of running away from home and gives a clear message that violence is almost never a good solution and sometimes makes matters worse.

Younger children may find some of the scenes and the family relationships of the two young boys disturbing, but there is much of interest to discuss with older children.