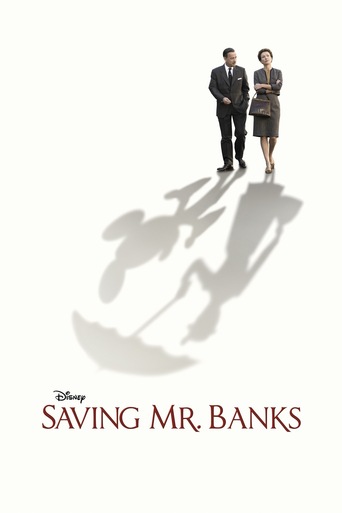 Not recommended under 13, PG to 15 (Themes; Disturbing scenes)

Saving Mr Banks begins in London in 1961 when the author of the Mary Poppins books, P. L. Travers (Emma Thompson) finds herself in a financial dilemma. Travers’ books are not selling like they used to, leaving her in need of cash. Travers has a way out - she can sell the film rights to her books to Walt Disney (Tom Hanks), who has approached Travers for the film rights every year for the last twenty years.  However, while she desperately needs the money, Travers detests the idea of letting Disney turn her beloved Mary Poppins into one of his silly cartoons full of musical numbers. To gain the screen rights, Disney agrees to allow Travers to have a say in how the film will be made and, while she is not yet willing to sign over the rights, Travers boards a plane headed to sunny Los Angeles to oversee the planning of the film Mary Poppins.

From this point on the film becomes a chronicle of the relationship between the introverted, and uncompromising P.L. Travers and the charismatic Walt Disney and  his team of creative film makers including screen writer Don Da Gradi (Bradley Whitford) and song writers Richard and Robert Sherman (Jason Schartzman and B. J. Novak).

Interwoven throughout the film are a series of flashbacks depicting the tragic childhood of P.L. Travers in an outback Australian country town in 1906. It was Travers’ tragic childhood that provided the inspiration for her Mary Poppins books. In the flashbacks we meet Travers’ loving father Robert (Colin Farrell), a creative dreamer, who escapes life’s responsibilities through alcohol abuse. We also meet Travers’ severely troubled mother Margaret (Ruth Wilson) and the inspiration behind the Mary Poppins character Travers’ aunt Ellie (Rachel Griffiths).

The film contains a number of emotionally intense scenes relating to self-harm and accidental injury related to alcohol abuse, attempted suicide and child abuse. Examples include:

Children in this age group may also likely be disturbed by the above-mentioned scenes.

In a brief flashback scene we see a man hugging his wife and then bending her backwards in a theatrical manner kissing her passionately on the lips.

The film contains a number of scenes depicting use of substances, intoxicated behaviour and thematic material relating to alcoholism. Examples include:

Saving Mr Banks is a dramatised biography targeting an adult audience. The film is engrossing and emotionally intense with Emma Thompson providing a standout performance as a deeply unhappy woman who is severely haunted by her past. Tom Hanks also gives a good performance as the charismatic Walt Disney. The film’s realistic portrayal of the lives of Travers’ alcoholic father and deeply unhappy mother contains some disturbing scenes and thematic material that is unsuitable for children under 13.

Values in this movie that parents may wish to reinforce with their children include endurance through adversity.

Parents may wish to discuss how events in our past may have a profound negative effect on our future which we may not be aware of, and how confronting the demons in our past may be necessary to enable a healthier future.