School for Good and Evil, The 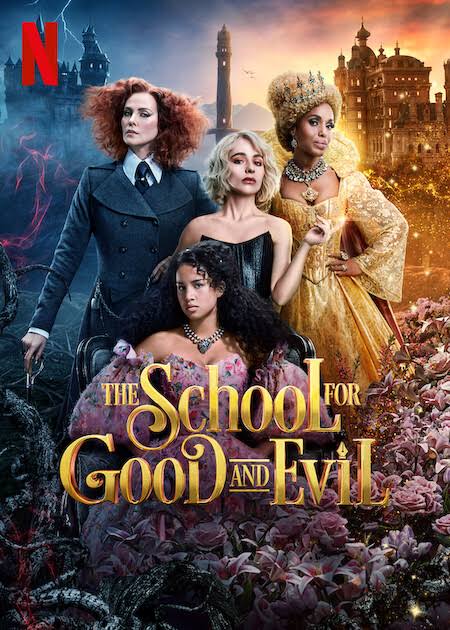 Not suitable under 11; parental guidance to 13 (violence, scary scenes, themes)

In a fairy tale world of magic, two brothers begin a school for good and evil where they coexist peacefully until one brother, tired of sharing power, uses the dark forces of blood magic to try and kill the other. In the end, having seemingly won the fight, the ‘good’ brother, the headmaster (Laurence Fishburne), sits aloft in his tower, appearing to have little to do with the everyday running of the school. These tasks he leaves to Lady Lesso (Charlize Theron), the Dean of The School Evil, and Professor Dovey (Kerry Washington), the Dean for The School of Good. Meanwhile in the village of Gavaldon, two girls, outcasts from a young age, have developed a powerful friendship. Sophie (Sophia Anne Caruso), who lost her mother when she was small, is forced by her stepmother to slave away doing all sorts of menial tasks. Sophie endures patiently and seems to embody kindness itself but all she really wants is to become a princess. At the same time, her best friend Agatha (Sofia Wylie) is relentlessly bullied and tormented by the townspeople who accuse her of being a witch. When Sophie learns the legend of ‘The School for Good and Evil’ and then discovers she will be forced to work in a factory, she hatches a plan to escape the town, find the school and train to be a princess. Agatha tries to convince her to stay but ultimately won’t let her go alone. When both girls are taken, Sophie is dropped at The School for Evil and Agatha at the School for Good. Both girls maintain that there has been a terrible mistake; that Sophie has been dropped in the wrong school; and that Agatha just needs to go home. Stuck where they are, the girls try to show the school where it went wrong and that Sophie is truly a princess, capable of having a prince fall in love with her. The headmaster, however, has other plans and the school is in far more danger than anyone could ever imagine.

The School for Good and Evil is a fantasy adventure based on the book series by Soman Chainani. The film is well cast and features numerous special effects. Due to the number and nature of scary scenes and violence, this is not a film for younger viewers but rather one that will be best enjoyed by families with older children as well as fans of the books.

The main messages from this movie are that true goodness lies in caring for others; that real power lies in being true to yourself and not being swayed by the opinions or actions of other people; that the best stories need both heroes and villains; and that we all have the ability to write our own tale and, ultimately, to become the stuff of legends.