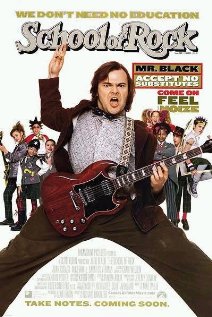 Dewey Finn eats, sleeps and breathes rock and roll music but unfortunately his other band members and fans don’t appreciate his talent. After an energetic head banging performance Dewey surfs into the crowd who fail to catch him and to make matters worse his own band fires him. Dewey falls into despondence which worsens when his flat mate Ned and girlfriend Patty insist that he must contribute to the rent or leave. Dewey receives a phone call meant for Ned from Horace Green Elementary School who is desperate for a relief teacher. Upon hearing the pay rate Dewey decides to impersonate Ned as he believes that relief teaching is merely baby sitting. Horace Green is the best elementary school in the state and the children are all in immaculate uniform, well behaved and very polite.

Dewey has no idea what to teach the children and tells them to have recess all day. The children want to be taught and complain that their parents’ money is being wasted. One morning Dewey listens in to a music lesson where he realises that the children are all very talented and so decides to teach them all about rock and roll music. He forms a band with the children and gives everyone a job to do such as lighting, security (to watch out for the principal) and even groupies. Dewey enters them into the Battle of the Bands but he has quite a few obstacles to overcome including winning over the principal so that he can take the children out on an excursion. The children all become enthusiastic and enter into the spirit of deceiving the principal and their parents. Dewey is eventually exposed but Summer who has been assigned as the band manager takes over and gets the band to the battle.

There is not much violence in this movie except for when Dewey crowd surfs and falls heavily onto the ground obviously hurting himself.

There are a couple of sexual references including:

There are a few instances of substance use including:

There is quite a bit of coarse language including the following:

The take home message is probably that children should stand up for and believe in themselves.