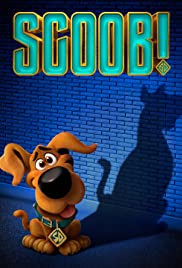 Scoob! is a modern animated reboot of the popular Hanna-Barbera cartoon, Scooby-Doo. The film tells the origin story of how Shaggy (voice of Iain Armitage), a lonely young boy, befriends a rag-tag, talking street dog and names him, ‘Scooby Dooby-Do’ (voice of Frank Welker). They become the best of friends and go everywhere together. One Halloween they go trick or treating with a bunch of other kids from the neighbourhood - Velma Dinkley (voice of Gina Rodriguez), Fred Jones (voice of Zac Efron) and Daphne Blake (voice of Amanda Seyfried) - and end up solving a spooky mystery together. From that moment on they are fast friends and form the mystery-solving gang, ‘Mystery Inc.’. Fast-forward ten years into the future and Mystery Inc. is seeking investment to expand their brand. They look to famous talent-finder and entrepreneur Simon Cowell (voice of Simon Cowell) but he will only invest in them if they ditch Shaggy (adult voiced by Will Forte) and Scooby, who he sees as worthless to the gang. Shaggy and Scooby leave them to it but they are very sad to be cast aside. To cheer themselves up they go to their favourite bowling alley, however things become strange when the bowling balls all transform into crazy little killing scorpion robots who chase the pair out into the alley. As Scooby and Shaggy try to outrun the mini robots, they are beamed up in a blue light tunnel to the aircraft of superhero, Blue Falcon (voice of Mark Wahlberg), his sidekick Dynomutt (voice of Ken Jeong) and the brains behind them and pilot of the ship, Dee Dee Skyes (voice of Kiersey Clemons). It turns out that wicked villain Dick Dastardly (voice of Jason Isaacs) wants to capture Scooby. An epic adventure follows; Scooby and Shaggy travel with the Blue Falcon gang, and Daphne, Velma and Fred hurry to find them so that together they can foil Dick Dastardly’s evil plans.

Friendship; Being excluded; Mystery and Supernatural; Heroes and Villains; Good versus Evil.

There is some coarse language and insults in this movie, including:

Scoob! is a fast-paced animation with a confusing plot line and some cheesy humour. It may appeal to fans of the original Scooby-Doo cartoons or other Hanna-Barbera productions. Although the target audience is children between the ages of 6 and 10, there is a little too much violence, crude language and too many scary characters for those under 8. There is a dose of adult humour in this film, presumably to keep parents entertained, but it’s pretty clunky and might lead to unwanted questions (for example – are you ready to explain what ‘Tinder’ is?). On a positive note, there are some nice messages about friendship and the importance of being loyal; and Scooby is as goofy and adorable as you remember him.

The main messages from this movie are that friendships are worth fighting for and that there is strength in numbers.