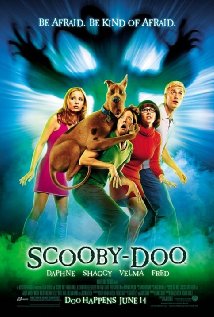 Mystery Inc disbands due to petty squabbles and jealousies but is reunited two years later when each of the team receives an invitation from Mr. Mondavarious to solve the mystery on Spooky Island. The group arrives to find a haunted amusement park where vacationing, rowdy punks are being turned into zombies resembling well behaved college students. There are plenty of monsters and evil villains on this island who perform all manner of horrific and supernatural deeds such as voodoo rituals and breathing out green vapour which renders the victim unconscious. The five heroes, Fred, Daphne, Velma, Shaggy and Scooby Doo decide it is better to work as a team to uncover the plot. Together they meet all kinds of dangerous situations which they tackle head on. There is much fighting and cartoon type violence where a lot of people get hit but are apparently unhurt. Daphne performs a major martial arts sequence in which she defeats a burly guard twice her size.

The team discover that the evil villain is stealing peoples’ “protoplasm” or soul which is then placed in a large swirling pool. The villain manages to take Fred, Daphne and Velma but Shaggy lifts their protoplasms out of the pool and returns them to their bodies. It takes some time for the protoplasms to find the right body with the consequence that Daphne is speaking in Fred’s voice and Fred is speaking in Daphne’s etc. until they get sorted out. By pulling off his face they discover that the evil villain in the body of Mr. Mondavarious is in fact Scrappy Doo who wants to take his revenge on the team for abandoning him when he was a puppy. We then see Scrappy Doo transform into a huge dog monster intent on taking over the world. The Mystery Inc team solve the day however and everyone is returned to their normal selves and Scrappy Doo is taken away.

Fred and Daphne get each other, Shaggy gets a girlfriend called Mary Jane and Velma meets a new boyfriend.

For children under seven there are many images and visuals that they may find scary:

For school aged children, much of the violence is unrealistic, which at this age they would be able to discern. However the Mystery Inc team are threatened by violent men which could be perceived as real. Scooby Doo is also threatened by monsters and with having to be a “pure sacrifice” for Scrappy Doo to achieve his ends. Some in the younger end of this age bracket could be scared by this.

There are a few sexual references and innuendo in this film. The girls, particularly Daphne, wear skimpy clothes and reveal much cleavage. When Fred is inside Daphne’s body he says he can see himself (Daphne) naked.

There is innuendo of drug use by Shaggy. He is shown in his van with smoke drifting out of the top only to see that it is meat cooking. Also his girlfriend’s name is Mary Jane which is often a colloquialism for marijuana. When Mary Jane at one time breathes ‘green stuff’ on him he says “like wow”.

There is drinking of alcohol on the plane and on the island. Velma is given a drink “on the house” which is spiked and she appears drunk.

The main take-home message of this movie is that it is okay to use violence if it beats the bad guy.

Values shown in the movie parents may wish to encourage are friendship, teamwork and equal gender roles.

Values shown in the movie that parents may wish to discourage are that violence is a way to solve conflict, attractive people are usually not bright, intelligent people wear thick rimmed glasses and well behaved college students are zombies.