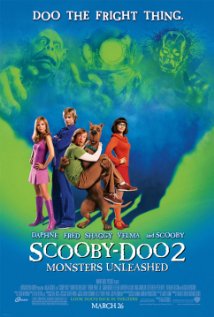 Not suitable under 8; parental guidance to 13 (violence, horror)

The Mystery Inc. gang are invited as celebrity guests to the opening of the Coolsville Monster Museum. Patrick the curator has put together a collection of monster costumes and exhibits, and Heather Jasper, a news reporter, is there to record the event. However during the night a storm breaks out smashing a large window in the ceiling. At that moment a Pterodactyl exhibit comes alive, breaks out of its cage and starts flying around the room creating havoc. Also an evil looking caped creature with a black iron mask appears in the roof threatening everyone in Coolsville. The Mystery Inc gang set out to find out what happened to Jonathon Jacobo who was the original pterodactyl ghost. He had been imprisoned for his evil deeds and was thought to have died while attempting to escape.

The gang are led to Wickles Manor, a spooky place where monsters are being created and set loose to terrorise the citizens of Coolsville. Scooby and Shaggy set out on their own to prove that they are real detectives while Fred, Daphne and Velma try to think of a way to stop the monsters. They retreat to their hideaway where Velma discovers how to reverse the monster making machine. They will then be able to destroy all the monsters if they can get back to Wickles Manor and replace the part in the machine. However they are discovered by a monster there and are chased in their van back to Wickles Manor. There is a big fight between the monsters and Fred, Daphne and Velma and it seems as though the monsters will win until Scooby Doo comes to the rescue.

There is quite a lot of violence in this movie, mainly comic style with no real life consequences:

There is a lot in this movie that would scare children in this age group. The monsters are all scary looking, some one-eyed skeletons, one large hairy monster with round yellow eyes, the evil looking black caped creature who looks and sounds like Darth Vader, the blob which changes shape continuously and the pterodactyl.

As well as the violent scenes mentioned above the following would also scare children in this age group:

Most children in this age group would understand it is only fantasy and as it’s set in a comic context would not be scared.

Most children in this age group would understand it is only fantasy and as it’s set in a comic context would not be scared.

There are not really any sexual references except for when Shaggy turns into a woman and he admires ‘his’ body. Also Velma dresses in a tight red leather body suit to impress Patrick.

There is some use of substances including:

There is a little coarse language:

There is no real take home message in this movie.