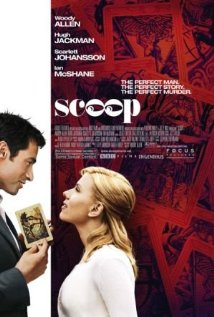 Not recommended to children under 8, PG to 15 (Sex, themes).

Sondra Pronsky (Scarlett Johansson) is an American  journalism student on holiday in London with her friend Vivian (Romola Garai). On a trip to the theatre to see Sid Waterman (Woody Allen) perform a magic show Sondra has an unlikely encounter with recently deceased Joe Strombel (Ian McShane). Joe was a renowned journalist famed for getting the latest ‘scoop’ and he’s returned to tell Sondra that Peter Lyman, (Hugh Jackman) son of Lord Lyman, is in fact the ‘Tarot Card Killer’. This killer has murdered a series of  prostitutes, but left a clue at the latest murder. His secretary, who is also now dead, discovered the clue and has now passed the information to Joe. Sondra, of course, finds this hard to believe but with the help of Waterman, who poses as her father, sets out to find the truth.
Sondra manages to set up a meeting with Peter Lyman who is instantly attracted to the beautiful young woman and dazzles her with his charm and good fortune. Sondra falls in love with Lyman and is very relieved when someone else is arrested for the murders. However, not all is at seems and Sondra finds herself in great danger.

Children in this age group are unlikely to be disturbed by anything this movie.

Scoop is a black comedy about life and death, which shows that reality isn’t always what it appears to be. The main message from this movie is not to be deceived by appearances.