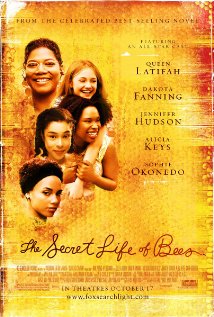 Set in South Carolina in the racially charged era of the 1960s, the Secret Life of Bees is the story of a young girl, Lily Owens (Dakota Fanning) who runs away from her abusive and very violent father T-Ray Owens (Paul Bettany) with her nanny, Rosaleen (Kate Hudson). Lily is also running from the tragic events in her past which caused her mother’s death. She seeks out the home of the wonderful Boatwright sisters who run a thriving bee farm where Lily hopes answers to some of the questions surrounding her mother’s life..
August Boatwright (Queen Latifah) welcomes Lily and Rosaleen to the farm. June Boatwright (Alicia Keys) is a little cooler towards Lily while the younger sister May (Sophie Okonedo), a simple soul, has never recovered from losing her twin sister April at a young age.

Along with learning how to keep bees, Lily learns much about life and finds solace in the wonderful companionship of sisterhood.

The Secret Life of Bees is an emotional drama set around racial tension and violence. The characters are well-developed and the cinematography displays the beauty of South Carolina.
The main messages from this movie are the negative consequences of racial prejudice and the need to find your roots and understand where you come from.
Values in this movie that parents may wish to reinforce with their children include:

This movie could also give parents the opportunity to discuss with their children attitudes and behaviours, and their real-life consequences, such as the fact that perpetrators of violent behaviour often suffer their own punishments