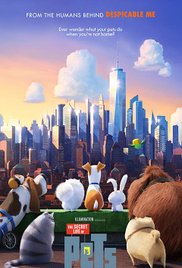 Not recommended under 8: parental guidance recommended 8-10, due to violence and scary scenes

The Secret Life of Pets tells the story of what pets do after their owners leave for work for the day. It seems they spend the day meeting with their friends, holding heavy rock parties, raiding the fridge and watching television. The main character is Max (voice of Louis C.K.), a loveable friendly dog whose happy life with his owner Katie (Ellie Kemper) is turned upside down when she brings home a ‘brother’ for him, another stray dog called Duke (Eric Stonestreet). Duke is a huge dog who threatens Max’s comfortable life. Max therefore decides to trash the apartment putting the blame on Duke and ultimately getting rid of him.

In the meantime however, the two take themselves for a walk and end up in a lot of trouble. They get ambushed by a gang of scrawny cats, ‘arrested’ by the dog catchers, set free by Snowball, an angry rabbit, and end up in the underworld of lost and unwanted pets. It soon becomes obvious that Max and Duke don’t belong in this group of angry animals whose aim is the destruction of humans and they have to escape. The chase is on for Max and Duke to find their way home and on the way learn some valuable lessons.

There is a lot of slapstick violence in this movie including:

Younger children in this age group could also be disturbed by some of the above-mentioned scenes.

There is a lot of name-calling that children may imitate, such as:

The secret life of pets is a comic adventure story about the life of pets when their owners aren’t around. The film is quite fast-paced and original, and does have some good underlying messages, but it is full of violence. It is also quite scary for younger children and therefore is more suited to older viewers with parental guidance recommended for eight to ten year olds.