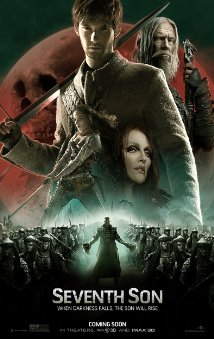 Not recommended under 15 (violence; disturbing scenes)

The film’s opening scene depicts witch hunter Master Gregory (Jeff Bridges) imprisoning  an evil shape-shifting witch, Mother Malkin (Julianne Moore), in a deep prison on top of a mountain where she will hopefully remain for the rest of time.

Decades pass and with the rising of the “Blood Moon” Mother Malkin becomes infused with new found power and escapes her imprisonment, bent on seeking revenge against Gregory. It is not long before Gregory and Mother Malkin engage in battle, with Mother Malkin killing Gregory’s apprentice William Bradley (Kit Harington) and escaping to her mountain fortress.

After the death of William, Gregory searches for a new apprentice who must be the seventh son of a seventh son. Tomas Ward (Ben Barnes) is given the position. Unbeknown to Master Gregory, Tom has supernatural powers that enable him to see visions of the future as a result of his mother being a witch.

With his new apprentice in tow, Gregory sets off to hunt down and destroy Mother Malkin who is gathering together a host of demonic minions. Along the way Tom encounters a beautiful young woman named Alice (Alicia Vikander) and the pair quickly fall for each other.

The film contains extended sequences of intense fantasy violence, including the use of swords, knives, staffs, axes, and chains. There are multiple violent deaths, at times gruesome although minimal blood and gore are depicted. Examples include:

Children in this age group are also likely to be disturbed by the violent and scary scenes described above.

Younger children in this age group may also likely be disturbed by some of the violent and scary scenes described above.

Some mild flirting and talk about love

Seventh Son is a fantasy action adventure which is a very loose adaptation of The Last Apprentice book series by Joseph Delaney, but appears to be aimed at a more mature audience than the books, being targeted at older teens and adult fans of fantasy films. There are a number of scary characters and scenes of transformations and violent deaths which are likely to disturb younger viewers, including many younger teenagers.

Parents may wish to discuss the gender stereotyping in the film.