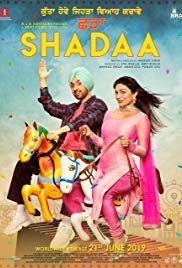 Not recommended under 11, parental guidance to 15

29 year old Chadta (Diljit Dosanjh) is a small time photographer from a village who, in his quest for the perfect wife, has said no to many marriage proposals. Consequently, he gains a reputation as the “unwilling bachelor” and soon no one is willing for their daughter to marry him. When the village matchmaker deems it impossible for Chadta to be married in this lifetime, Chadta refuses to admit defeat and vows to find a wife by the end of the month. When travelling for a wedding photoshoot Chadta meets Vanjhli (Neeru Bajwa), a wedding planner/coordinator who is 31 years old and who has sworn, for personal reasons, not to get married. Chadta appears to instantly fall in love with her despite her multiple rejections of him. When they are next thrown together, he proposes a trial arrangement where she gets him to do the photoshoot she has promised the couple and he gets to show her what life would be like if she were married to him. By the time the wedding shoot is finished Vanjhli has begun to have feelings for Chadta, however, Chadta, through a slight misunderstanding, thinks he has found freedom and vows to remain a bachelor. It isn’t until a groom hires Chadta to shoot another wedding and he discovers that Vanjhli is the bride-to-be that Chadta rethinks his decision and tries to win back the love of his life.

There are no additional scenes that would likely scare or disturb children in this age group.

Shadaa is a Punjabi, romantic, comedy with English subtitles. The plot is somewhat predictable, the acting very believable and the vibrant colours and dance sequences are excellent. The film may possibly lack interest for many younger children but will appeal to fans of Indian films and mature audiences who peak Punjabi or don’t mind subtitles.

The main messages from this movie are to stay true to your beliefs, to follow your heart and to realise that the course of love does not always run smoothly.