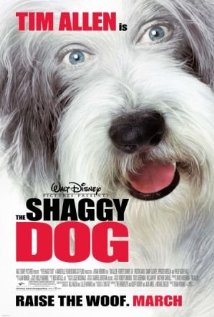 Not suitable under 6; parental guidance to 12 (theme)

Dave Douglas is an ambitious lawyer who has hopes of becoming the next district attorney. In the meantime he has lost touch with his family, his wife (Kristen Davis), daughter Carly (Zena Grey) and son Josh (Spencer Breslin).

Dave is currently prosecuting an animal liberation protestor for attempting to set fire to the laboratory of a large drug company. Carly believes in animal liberation and is part of the demonstration against the same company. To this end she sneaks off with her boyfriend with the intention of rescuing the animals from the building. Once inside they find a big English sheepdog whom they call ‘Shaggy’. Shaggy is taken home to Carly’s place where he bites Dad. Through this bite Dad gets a mutant virus that turns him into a dog. Dad then moves between being a man and a dog in a seemingly random pattern, and as a dog learns important lessons about his client and the importance of his family.

An electric probe is used to stun Shaggy, Dave Douglas and the scientists who work in the lab.

There are some scenes that could disturb children under the age of five, including:

The above scenes may upset the younger end of this age-group more as they will understand the implications of what the scientists are going to do. They could also be concerned by:

Children over the age of 13 could see this movie with or without parental guidance.

Some mild coarse language and some distasteful comments such as: When Dad is a dog and is at home, he says something like ‘phew you stink, you must be on heat’ in reference to his wife.

The Shaggy Dog is primarily a movie about good vs. evil where good triumphs in the end. Along the way, the family learns how to be a family again. The film also highlights the need to communicate with each other rather than acting in isolation. The other message that comes through strongly is the need to stand up for what you believe in as often this is the right thing to do.

This movie could give parents the opportunity to discuss with their children the issue of animal liberation.