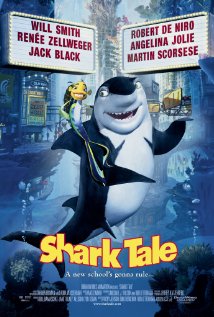 Not suitable under 5; parental guidance to 8 (scary scenes)

Oscar is a little fish in a very big pond. He works at the local Turtle Wax Whale Wash where his friend Angie works as a receptionist, but he longs to scale to greater heights and become a somebody living at the top of the reef. Oscar is in a lot of financial trouble, as he owes his boss puffer fish Sykes 5000 clams. When Sykes makes intimidating threats to Oscar that he must pay up, Oscar tells all his woes to his friend Angie. Unselfishly Angie gives Oscar her grandmother’s pearl to repay the debt but Oscar squanders it on an ‘absolute winner’ at the races.

Meanwhile Don Lino, the Boss of the Great White Sharks, is raising his sons Frankie and Lenny to take over the family business. However Lino is greatly embarrassed by Lenny who is ‘different’ to other sharks as he’s a vegetarian and refuses to kill for his food. Lino sends Frankie out to teach Lenny the ropes and the victim becomes unsuspecting Oscar. Lenny pretends to eat Oscar but when it’s obvious that he hasn’t Frankie comes in for the kill. At this point Oscar’s luck is dramatically turned around as Frankie is killed by a falling anchor.

Oscar becomes known as ‘the Shark Slayer’ and Protector of the Ocean. He plays this for all it is worth, becoming very famous and rising to the top of the social ladder. There he meets Lola, a seductive female fish who lures him away from Angie. Oscar is of course totally unaware that Angie loves him as a ‘nobody’ and falls for Lola. Things become complicated for Oscar when Don Lino vows vengeance for Frankie’s death and sends the ‘mob’ to find and destroy the ‘Shark Slayer’. Oscar befriends Lenny who has run away and together they learn a few lessons about life and have some important decisions to make.

There is some violence in this movie some set in a comic context:

Children under the age of five could be scared by the above-mentioned violence, particularly the death of Frankie. The following scenes may also disturb some children in this age group:

Children aged eight to thirteen would probably not be scared by this movie as they would understand that it is fantasy. However they could still be scared by Frankie being killed by the anchor.

There is a large sign for Coral Cola which at a quick glance would be mistaken for the Coca Cola logo.

There are no sexual references. However, Lenny being a vegetarian and his father’s disgrace at that, is an obvious parallel with a parent’s possible attitude towards a gay son.

There’s no nudity or sexual activity

The take home message of this movie is that life at the top isn’t all that it appears.

Values parents may wish to encourage include selflessness, friendship and loyalty.