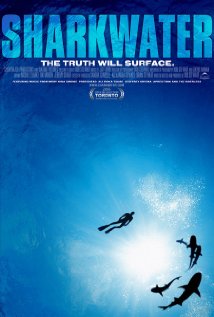 Not recommended under 10, PG to 15 due to disturbing scenes.

Sharkwater is a documentary film written and directed by, and starring, the passionate marine activist, Rob Stewart.  Stewart’s goal is clear: he wants to rid the world of the common myth that the shark is a barbaric predator that is to be eliminated and instead spread the message that they are creatures fundamental to the world’s ecosystem and should be revered and protected.  The film has an emphatic focus on the shark world and the rising risk of extinction that sharks face due to inhumane, and often unregulated, practices such as shark finning, long line fishing and shark hunting.

Stewart tells the story through his own experiences of a photographical trip to Cocos Island and the Galapagos Islands where he hoped to film underwater footage of the sharks.  On his way to Costa Rico however, his crew run into unexpected dramas that see them involved in boat chases, machine gun pursuits, murder charges, life and death illness and the Costa Rican underworld.

There is significant violence (particularly towards animals) in this movie including:

Children in this age group are likely to be disturbed by the graphic scenes and cruelty to animals described above.

Children in this age group are likely to be disturbed by the graphic scenes and cruelty to animals described above.

Children in this age group are likely to have more understanding of what is occurring, so may be more disturbed than younger viewers. They may also be disturbed by the scenes when the main character has a skin-eating bacteria, is hospitalised and is told that it is likely that he will lose his leg

There is some smoking

Sharkwater is successful in its campaign to shock and educate.  It uses graphic and disturbing footage, spectacular underwater cinematography and powerful facts to educate us on the plight of the shark.  It is likely that all who see this film will come away with a changed perspective and a newfound love of the shark, an animal that has lived as an integral part of ocean life for over 450 million years but is predicted to be wiped out within 10 years if practices remain unchanged.