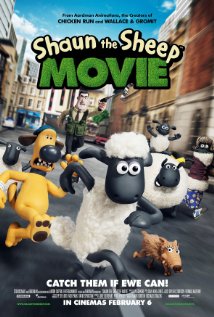 Not suitable under 4, parental guidance to 7 (scary and upsetting scenes)

Shaun is a sheep who lives with his fellow sheep on a farm in the English countryside. One day Shaun gets bored with his daily routine so, with the help of his animal friends, he decides to kidnap the farmer while he is still sleeping and lock him in a caravan. Shaun and the sheep are then going to have a day of fun, but it all goes wrong.  The caravan rolls away and the farmer ends up lost in the city without any memory of who he is.

Younger children in this age group may also be scared or upset by some of the scenes listed above.

Nothing of concern in the movie, but plenty of associated merchandise being marketed to children.

Based on the popular television show, Shaun the Sheep Movie is a funny adventure story about getting lost in a big city. Parents should be aware that, as in the television show, there is no talking in the film and it may be a bit boring for older children. Because of some scary and upsetting scenes, the film is not recommended for under fours and parental guidance is recommended for children aged four to seven.

The main message from this movie is that sometimes a little change is good but that you should also appreciate what you have.

This movie could also give parents the opportunity to discuss with their children what happens in real life animal protection agencies and animal shelters.