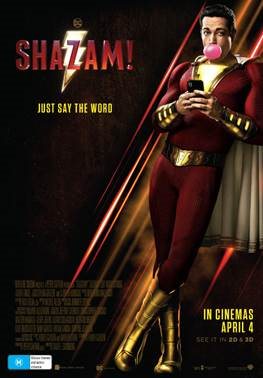 Not recommended under 13, Parental guidance to 15 (violence, scary scenes).

Fourteen-year-old Billy Batson (Asher Angel) is a streetwise foster kid, determined to find his mother whom he lost as a small child. When a last ditch effort to locate her goes wrong he finds himself in a group foster home with 5 very different siblings including: the studious Mary (Grace Fulton), tech wiz Eugene (Ian Chen), handicapped and superhero obsessed Freddy (Jack Dylan Grazer), silent and serious Pedro (Jovan Armand) and sweet little Darla (Faithe Herman). After standing up for Freddy Billy is chased through the streets by two violent bullies. He escapes on the subway and finds himself in a wizard cave where he is presented with magical powers, transformed into the adult superhero Shazam! (Zachary Levi), and charged with saving the world. Meanwhile the power-hungry Dr Sivana (Mark Strong) has released the 7 deadly sins and will stop at nothing to defeat Shazam! While coming to terms with his powers and abilities Billy learns that sometimes the family you have been searching for is the one that you already have, and that unconditional love is the greatest power of all.

There is a lot of violence in this movie including use of guns and fighting. Examples include:

Shazam! is an action-packed movie with some important messages and funny lines. Despite being presented as a kid friendly film this one should be viewed by slightly older audiences.

The main messages from this movie are that families are not always bound by blood, that true power consists of sharing your strengths and raising others up instead of putting them down and that goodness, selflessness and courage will triumph over evil in the end.