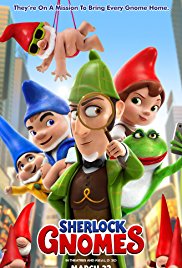 Not recommended under 5; PG to 8 (animated violence, adult themes and some coarse language).

This film is a follow-on from the 2011 film “Gnomeo & Juliet”, in which famous literary characters are reimagined in a parallel world where garden ornaments come to life. In this new instalment, Gnomeo (Voice of James McAvoy), Juliet (Voice of Emily Blunt) and their friends have been relocated to a new London garden that is looking a bit worse for wear and is in need of a gnome makeover. All over London, gnomes are disappearing from their gardens but thankfully, Sherlock Gnomes (Voice of Jonny Depp) the “sworn protector of London’s garden gnomes” is already on the case. When Gnomeo and Juliet return home one day to find all their fellow ornaments have been taken, Sherlock Gnomes is already at the scene and ready to help them solve the mystery. Sherlock and his trusty sidekick Watson (Voice of Chiwetel Ejiofor) team up with Juliet and Gnomeo to uncover and search for the clues that will save the gnomes.

There is some animated violence in this movie including:

There are some very mild sexual and romantic references in this movie, including:

Sherlock Gnomes is a fast-paced, comic and fairly predictable adventure story aimed at primary-school aged children. The sub-plot concerning Gnomeo and Juliet's relationship and some adult-oriented humour may be hard for  young chiildren to understand, and there are some violent  scenes. The film is not recommended for under  fives and parental guidance is recommended for five to eight -year olds. Children will enjoy the delightfully animated gnomes and other garden ornaments and it may be a good way to introduce them to iconic literary characters such as Romeo and Juliet and Sherlock Holmes.

The main messages from this movie are that you should never take people for granted, you should appreciate things that people do for you, and that being in a partnership makes you stronger than being alone.