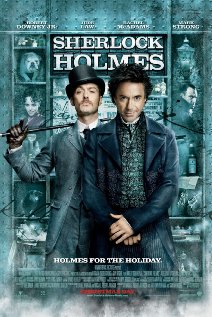 Not recommended under 13, PG to 15 (Frequent violence, Scary scenes and themes)

The film begins with Sherlock Holmes (Robert Downey Jr.) and Dr. Watson (Jude Law) rushing through the back streets of London while fighting off numerous villains in a bid to save a young woman from ritual murder by Lord Blackwood (Mark Strong). Apparently Lord Blackwood is high ranking member of a secretive order known as The Temple of Four Orders, an organisation that has been employing the dark arts for centuries, and whose patrons include high ranking government officials. Blackwood is found guilty of the murder of several young women and sentenced to death by hanging, but before the sentence is carried out Blackwood tells Holmes that his execution is part of his grand diabolical plan.

Blackwood is Watson’s and Holmes’s last case together as Watson is about to marry his fiancée Mary Morstan (Kelly Reilly) and move out of Baker street. With no new case Sherlock becomes bored and depressed until he is paid a visit by Irene Adler (Rachel McAdams) an adversary out of Holmes’s past. Irene claims to be working for an anonymous employer who wishes to find a missing man. Intrigued by both Irene and her anonymous employer, Holmes agrees to take up the case with Watson going along.

Following his visit from Irene Adler, Holmes receives a visit from Scotland Yard who require Holmes’s assistance to investigate claims that Blackwood has come back from the grave and the pair find out that their battle with Blackwood is not over.

The film contains segments of intense and stylised action violence with minimal blood and gore depicted. Some of the violence is depicted in slow motion with accompanying narration by Holmes and the scene then repeated at normal speed. Examples include:

Younger children in this age group may also be disturbed by some of the violence and scary scenes described above.

The film contains one or two instances of low-level coarse langue and name calling. Examples include:

Sherlock Holmes is an entertaining action drama that targets a wide ranging older audience, although the plot is somewhat predictable.

When bored, Holmes is depicted as a self-destructive manic depressive. Parents may wish to discuss how mental health issues impact on those inflicted as well as those around them.