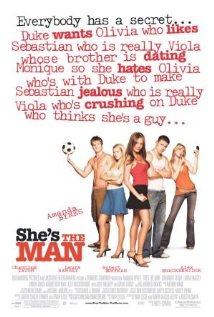 Viola Hastings (Amanda Bynes) is a Cornwall high school student who is the star of the girls’ soccer team, and whose main passion in life is playing soccer. When Cornwall cuts the girl’s soccer team from their program, and refuses to allow Viola to try out for the boy’s team, Viola poses as her twin brother Sebastian, who is away in London for a couple of weeks. She enrols at his new school Illyria (Cornwall’s soccer rival) so she can try out for their soccer team,. With the help of her friends, Viola dons a boys wig, sticks on some sideburns, takes a crash course in how to walk, talk and act like a man, and passes herself off as her brother.

Viola/Sebastian’s life at her/his new school becomes complicated when she falls for her new roommate, Duke Orsino (Channing Tatum) who has a crush on Olivia (Laura Ramsey), who in turn is smitten with Sebastian. Also in the mix is Monique (Alex Breckenridge), Sebastian’s totally conceited girlfriend, whom Viola dumps.
The big day of the soccer match between Cornwall and Illyria arrives, but things go awry when Viola sleeps in and her brother, the real Sebastian, who can’t play soccer, arrives.

Although the low level violence described above is depicted in a comic light, it could still disturb or negatively influence some children under the age of five.

While children over the age of eight may appear to cope better with the film’s low level violence, they may still be negatively influenced by it.

There is some partial nudity and implied sexual activity in this movie, including:

There is some very occasional mild coarse language, including:

She’s the Man is a romantic comedy which provides a contemporary adaptation of Shakespeare’s Twelfth Night and is well suited to its targeted audience of younger teenage girls. While the lead character is not all that convincing as a boy, her character is very likeable as a girl and the film does contain some funny moments.

The main message of the movie is about the unfairness of being treated unequally because of gender. There is also a message about the unethical use of emotional blackmail, as in deliberately making someone you are attracted the jealous in order to gain their attention. Message are mixed in that Viola is rewarded for her use of deception to gain what she wants, and there are no negative consequences for her deception.

Parents may wish to encourage the manner in which Viola persevered through adversity to obtain her goals, and the manner in which her friends supported her.
This movie could give parents the opportunity to discuss with their children what can really happen if they use deception to get what you want and with adolescents discuss more constructive ways to handle sexual jealousy.

Parents may also wish to discuss with their children how women have been affected by gender inequality in the past and how it can still be present in current times.