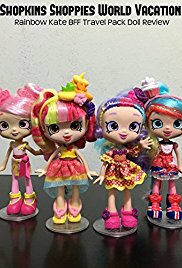 Recommended for children under 8 – lacks interest for older children.

When Apple Blossom (voiced by Kate Murphy, as are all characters) wins an international vacation for herself and all of her friends, including Buncho Bananas, they find themselves in London where Kooky Cookie winds up in the middle of a royal jewel heist. Krispy Cookie and Crunchy Cookie are the masked bandits who will stop at nothing to grab the crown jewel and keep it for themselves. Unwittingly Kooky offers to help them but, before they can come back for the jewel, Kooky is whisked off to Paris to become the muse of famous fashion designer Macy Macaroon. While her friends follow her trail and the world is caught up in Cookie fashion fever, Kooky is whisked off to New York Fashion week and is later sent to Japan where her friends must demonstrate their loyalty and devotion to win her back, save the jewel, and expose the bandits for who they truly are.

Apart from the above-mentioned violence, there is nothing in this film that is likely to scare children of any age.

The main messages from this movie are the importance of friendship and how there are very good people all over the world willing to help and happy to care for others if given a chance.