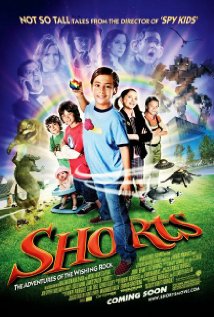 Not recommended under 8, PG to 13 (Violence and themes)

Shorts is an American children’s fantasy film written and directed by Robert Rodriguez.  The story, seen through the eyes of eleven year-old Toe Thompson (Jimmy Bennett), revolves around the people living within the affluent but troubled community of Black Falls.  All of the adult members of this community work for the tyrannical and perhaps megalomaniacal Mr. Black (James Spader), who heads the immensely successful Black Box Unlimited Worldwide Industries Incorporated.

Toe Thompson describes how life in Black Falls is interrupted after the discovery of a magical rainbow-coloured wishing-rock that falls from the sky.  Residents soon learn that this stone enables those who possess it to achieve whatever they wish for, which leads to a number of unexpected consequences.  Toe’s own daily encounters are soon transformed through his experiences with this rock, helping him to face school bullies such as Cole Black (Devon Gearhart) with a new confidence.

The title “Shorts” is derived from the film’s untypical structure, consisting of a number of somewhat dislocated and non-chronological sequences depicting the experiences of the various members of Black Falls who encounter the magical rock.  Among those affected by the stone are Toe’s workaholic parents (Leslie Mann and Jon Cryer), his sister Stacey (Kat Denning), friends Loogie (Trevor Gagnon) and Nose (Jake Short) and Nose’s mad-scientist father Dr. Noseworthy (William Macy).

There is some derogatory and threatening language in this movie, including:

Shorts is a sometimes confusing fantasy film containing a sparse storyline interwoven through moments of comedy and an abundance of violence. While the plot involves some elements that could be used to provoke meaningful conversations with children, many adults may find little other reward in this movie.

The main intended message from this movie is that greed will not bring happiness.  However, the large number of violent incidents may also relay an implicit sanction of violence as an acceptable means of conflict resolution.