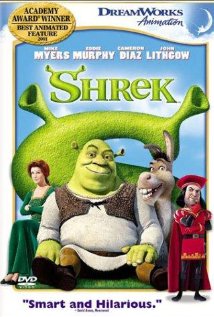 Shrek is the animated tale of a grumpy green ogre (voiced by Mike Myers) living a life of solitude in a mucky, slimy swamp.....just the way he likes it!  That is until Lord Farquart (voiced by John Lithgow), the ruler of the Kingdom of Dulac, demands that all fairy tale creatures and talking animals are banished from his lands to ensure a pure community.  Displaced and desperate, the three blind mice, Tinkerbell, the three little pigs and many other fairytale creatures end up in Shrek’s swamp looking for a place to live. Angered by the unwelcomed intrusion Shrek demands that one of the creatures takes him to Lord Farquart so he can ‘sort out this mess’. Donkey (Eddie Murphy)offers to take Shrek to the kingdom of Dulac to meet Lord Farquart. Lord Farquart is less than impressed by Shrek’s demands and after his soldiers fail to kill him, he makes a deal with Shrek that if he can rescue Princess Fiona (Cameron Diaz) from the castle where she is being held hostage, he will ensure that all of the fairytale creatures are removed from his beloved swamp.

What follows is the adventure filled journey taken by Shrek and Donkey as they attempt to rescue Princess Fiona from a fiery dragon, and take the perilous journey home to deliver the feisty Princess Fiona to her Prince Charming.

Cruel actions and attitudes towards the ogres and magical creatures

There is no product placement in this movie, although a large amount of associated merchandise, including food, marketed to children.

There are some sexual references in this movie, including:
There is some sexual innuendo throughout the movie examples include a reference to a tall building that Lord Farquart built to “compensate for something”
There is some flirting between Shrek and Princess Fiona throughout the movie- for example Princess Fiona falls on Shrek and they share an intimate look as if about to kiss

There is one instance of substances use in this movie:

Shrek is a family comedy about an unsuspecting hero, a faraway Princess and the journey they took to find their one true love.

The main messages from this movie are about following your heart and not judging someone based on how they look.

This movie could also give parents the opportunity to discuss with their children attitudes and behaviours, and their real-life consequences, such as:
discriminating against people who are different