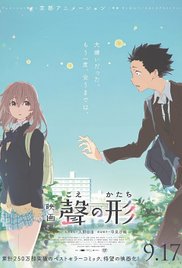 Also known as ‘The shape of voice’. Not recommended under 14, due to scenes likely to scare younger viewers and themes, particularly that of suicide. The film is in Japanese with subtitles so may be difficult for younger viewers to follow

A silent voice is a subtitled animated Japanese film by Yamada Naoko focusing on the relationship between two school students, Shoya Ishida (Miyu Irino) and Shoko Nishimiya (Saori Hayami). When Shoko starts as a new student in an established class, delinquent Shoya begins to tease her as a result of her deafness. However, when he transfers to Junior High, his previous friends turn against him and Shoya finds himself isolated and lonely. He begins to become preoccupied with guilt over his past actions towards Shoko, and frequently thinks of how he could repent for his transgressions against her.

One day, he reunites with Shoko and the two become tentative friends. In an effort to help bring happiness to her life, Shoya sets out to reconnect Shoko with the other students from elementary school whom she never had a chance to know

The two gradually begin to develop strong feelings for one another, although Shoko still experiences feelings of hopelessness that eventually lead her to attempt suicide. When Shoya tries to stop her, he puts his own life in jeopardy and the two must both come to terms with their actions.

Children in this age group may be scared by the above-mentioned scenes. They are also likely to be unable to understand the film which is in Japanese with subtitles

Children in this age group are also likely to find the film hard to follow because of subtitling. They may also be upset by the above-mentioned scenes and the idea of suicide.

Children in this age group may also be disturbed by the idea of suicide and attempted suicide of a leading character. They may also find the death of the grandmother and scenes of her funeral disturbing.

There is partial nudity in the film, including:

A silent voice (also known as The shape of voice) is a moving animated film about teenagers that tackles a range of individual and interpersonal issues. The film explores the nature of friendship and examines the idea that friendship is not something that is founded upon logic and reason, but rather, connection and vulnerability. It deals with important themes such as bullying, suicide and atonement and is therefore not recommended for children under 14. Parents may wish to discuss the issues raised with older teens.

The film is in Japanese with subtitles, so is likely to be hard to follow for younger children.