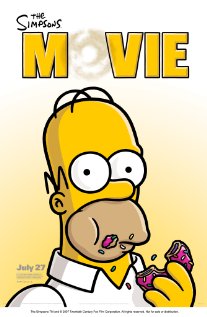 Not recommended under 10, PG to 13 (Violence, sexual references, substance use, themes )

In the country town of Springfield, Lisa Simpson (voice of Yeardley Smith) embarks on a campaign to rid the local lake of pollution.  However, her father, Homer (Dan Castellaneta) decides that the rules do not apply to him and proceeds to dump a load of pig manure into the recently cleansed lake.  What ensues is a natural disaster of toxic proportions causing the government to isolate the town by enclosing it into a large glass dome.  Naturally, the townspeople are less than happy and the Simpson family barely escape their wrath.  After much soul-searching, Marge (Julie Kauner) decides to return to Springfield in an attempt to save it from being permanently wiped out.  Homer eventually follows and he and Bart (Nancy Cartwright) manage to save the town.

There is a significant amount of animated violence in this movie including:

Several famous people were referred to or used during the movie including (but not limited to):

The The Simpsons Movie is a feature-length version of the long-running American cartoon series of the same name.  The series has always been controversial, dividing its viewers between those regarding it as crude and offensive, and those regarding it as enlightened and funny.  The movie will no doubt do the same.

The main messages from this movie are the need to respect the environment and protect it from the detrimental effects of pollution, and the importance of family cohesion.
Values in this movie that parents may wish to reinforce with older children include honesty and determination against all odds.

Parents may wish to discuss the real life consequences of violence,  lack of respect for authority, animal cruelty and poor eating habits.