Sinbad: Legend of the Seven Seas 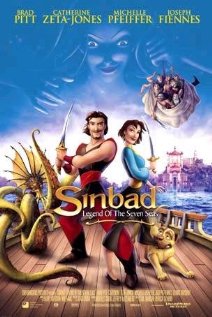 This new tale of Sinbad, Legend of the Seven Seas begins when Sinbad and his cutthroat pirate crew attack another ship for treasure. The treasure turns out to be the Book of Peace which Prince Porteus is returning to his home town of Syracuse. The Book is a valuable treasure that has protected Syracuse and its citizens for over one thousand years. It turns out that Porteus and Sinbad were childhood friends who went their separate ways and haven’t seen each other for ten years. However, that doesn’t prevent Sinbad from fighting Porteus for the Book. Meanwhile Eris, the goddess of chaos, also desires the Book as she wishes to turn the whole Earth into chaos. She creates a huge sea monster to attack the ship also. Porteus and Sinbad join forces to fight the monster which they manage to force back into the ocean but it takes Sinbad with it. Eris promises Sinbad the world if he will steal the Book which he agrees to do.

Sinbad arrives at Syracuse to find the Book returned to its rightful place and there he meets with Marina who is promised to Porteus. Marina is the reason that Sinbad left Syracuse ten years earlier as he realised then that he loved her. Eris decides not to wait for Sinbad but transforms herself into him and steals the Book herself. Sinbad is charged with the theft and sentenced to death, but his friend Porteus who believes that he didn’t steal the Book, offers himself in his place to give Sinbad a chance to verify his story. Sinbad has ten days to find the book and return it or Porteus will die. Sinbad is free to go and is determined to sail away to Fiji, however Marina has stowed away on the boat and manages to persuade Sinbad to go to Tartarus to retrieve the Book.

The adventure continues with many hazardous incidents and Eris continually tries to thwart their journey. They finally arrive at their destination and Eris presents Sinbad with a moral dilemma when she tests him with a question which he must answer truthfully. If he answers truthfully he will get the Book back; if not he has to return to Syracuse to his death. The question is “will he return to Syracuse without the Book?” This is a hard question for Sinbad and a decision only he can make.

There is quite a bit of glamorised violence in this movie as it is performed by Sinbad who is seen as a hero, including:

There is much in this movie that would scare children in this age group. In addition to the violent scenes above the following would also scare young children:

Children over the age of eight would probably be able to discern that this is only a fantasy movie and would not be scared.

There is no drug or alcohol use however when Eris bewitches the men they appear drugged.

The take home message is that good triumphs over evil and that however hard it is to make a decision, the right choice is always the best choice.