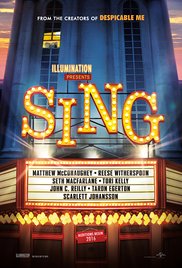 Not suitable under 4; parental guidance to 7 (scary scenes)

Buster Moon the Koala (voice of Matthew McConaughey) is a smooth-operating theatre lover who needs to save his beloved and crumbling ‘Moon Theatre’ from financial ruin. He decides to hold a grand, citywide singing contest in the hope of getting the crowds back in.

The audition attracts a colourful array of animals and there are some fabulous and comical performances. Buster and his ageing assistant, a hilariously incompetent cross-eyed lizard ‘Miss Crawl’ (Voice of Leslie Jones) choose their favourite acts for the big show and rehearsals begin.

Unfortunately for Buster, the bank is breathing down his neck and he faces immediate repossession. In a bid to raise some funds to put on the talent show he tries to impress the wonderful ancient diva – a sheep called Nana Noodleman (voice of Jennifer Saunders) in the hope that she might fund the show from her vast fortune. As Buster tries to raise funds, all the contestants face their own personal struggles on their journey to the ultimate performance.

Performance, auditions and competitions; conquering your fears; following your passion; gambling and crime

There are a few scenes of mild animated violence in this movie including:

There are some romantic and sexual references in this movie as well as some mild crude humour, including:

There are some very mild verbal insults in this movie, including:

Sing is fun to watch and is likely to be enjoyed by most of the family, although some scenes may be too scary for children under four, and parental guidance is recommended for children up to the age of 7. The film is full of positive messages, great music and beautiful animation.

The main message from this movie is that you should not let fear stop you from doing the thing you love.