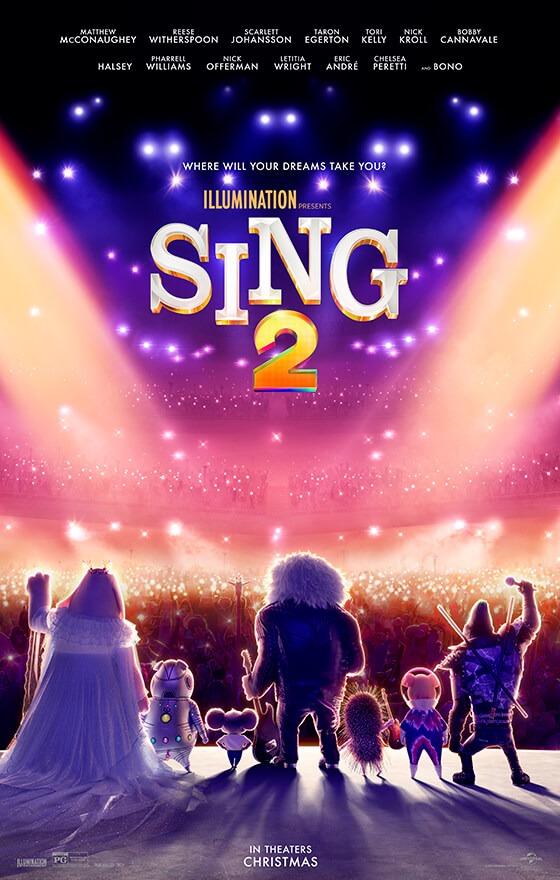 Buster Moon (voice of Matthew McConaughey) dreams of making it big and taking his show from Moon Theatre to Redshore City. Turned away by a talent scout who sees little potential in his small group of underdogs, Buster hatches a plan to audition for Mr Crystal (voice of Bobby Cannavale) himself. With the help of his friends Gunter (voice of Nick Kroll) and Ash (voice of Scarlett Johansson), Buster promises a show that will be out of this world. In order to seal the deal, he also promises that the renowned and reclusive rock legend Clay Calloway (voice of Bono) will take part in the performance. Mr Crystal agrees to give him a shot but reminds Buster what he stands to lose if he fails. Failure looks like it might be a real possibility when Johnny (voice of Taron Egerton) struggles to learn the choreography; Rosita (voice of Reese Witherspoon) develops a fear of heights; Meena (voice of Tori Kelly), who has never been in love, must perform a romantic scene with Darius (voice of Eric Andre), a self-absorbed playboy buffalo; and despite their best efforts, Clay Calloway adamantly refuses to perform with them. Though all the odds are stacked against him and countless obstacles come his way, Buster refuses to give up. He keeps trying; he encourages others and looks for creative ways to overcome challenges. Even when it looks like all of their hard work will be wasted, Buster’s team comes together to put on a performance the likes of which Redshore City has never seen and one that it will never forget.

Corporate greed; Materialistic entitlement; Abuse of power and corruption; Reclusiveness as a means to cope with grief.

Sing 2 is an animated adventure with a loveable cast, fabulous soundtrack and powerful message about not giving up and following your dreams. Suitable for all but the youngest viewers, this is a film that the whole family can enjoy together.

The main messages from this movie are that you must fight for what you believe in and that great things are destined for anyone who dares to follow their dreams.