Sing a Bit of Harmony 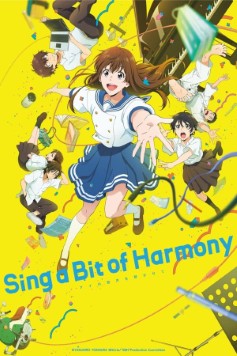 Conscientious and quiet teenager, Satomi (Japanese: Haruka Fukuhara/English: Risa Mei), lives with her mother, Mitsuko (Sayaka Ohara/Laila Berzins), who is a scientist at a large Artificial Intelligence (AI) company, Hoshima Electronics. Mitsuko has been working inhumane hours, creating an AI robot named Shion (Tao Tsuchiya/Megan Shipman) that is supposed to look and behave so much like a human that it cannot be distinguished from a real human. To field-test Shion, she is sent to Satomi’s high school under pretence of being a new student. Satomi accidentally comes across some of her mother’s work files, and therefore realises quickly that Shion is in fact her mother’s project under scrutiny of her male-dominated work place. Even though Shion acts bizarrely, Satomi decides to help Shion fit in and be a success, along with a group of class mates. But as they get to know Shion, it becomes obvious that she is more than a heap of hard and software, and that she inspires each of them to start dealing with some of their own personal challenges.

Sing a Bit of Harmony is a Japanese sci-fi/fantasy/musical/teen animé movie. There are a lot of positive role models and messages, and some of the scenes that appear a bit odd (some might say cringe-worthy, i.e. some of the singing scenes) actually make sense along the way as the story unfolds and grows in complexity. The film is set in a futuristic setting where artificial intelligence and robots are present in every-day life. Mild violence and sense of threat, mild coarse language, the complexity and themes of the story make the film most suitable for a teen or special interest audience.

The main messages from this movie are that people and life are complex – happiness is not the same for everyone. Also, happiness is often derived from seeing/making other people happy, but at the same time it is also important to look after your own needs.