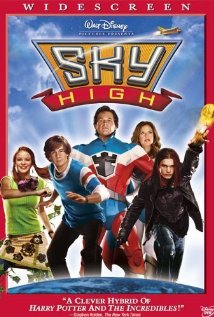 Will Stronghold (Michael Angarano) is the 14 year old son of superhero parents, The Commander and Jetstream, also known as real estate agents, Steve and Josie Stronghold (Kurt Russell and Kelly Preston). He is about to start his first day at Sky High School for superheros, but to his consternation, hasn’t yet found his superpowers as the rest of his peers have. So while his parents go off to fight a monster terrorising the city, he joins his best friend, Layla on the flying school bus to the anti-gravity Sky High.

Day one for Will at Sky High includes being bullied, becoming enamoured with a senior student, Gwen Grayson, meeting the principal (Lynda Carter), being humiliated during ‘Power Placement’ when he is made ‘Sidekick’ instead of ‘Hero’ and meeting his arch-enemy, Warren Peace. Day Two involves Will and Layla’s first ‘Hero Support’ class with Mr Boy, former sidekick to the Commander and previously known as All American Boy (Dave Foley). It is also the day, Will tells his parents that he may never have any superpowers. Although initially disappointed, they are cheered by the hope that Will could be a great real estate agent.

Their disappointment is short-lived however, as Will discovers his power of super-strength the next day during a lunchtime fight with Warren Peace. Will is then moved into the ‘Hero’ stream, separating him from his ‘Sidekick’ friends. Adding to his problems is the ongoing feud with Warren, protecting his friends from bullying from senior students and the distracting but welcome advances of Gwen, causing him to neglect Layla (who harbours a secret crush on him). All the while, Will and his parents are unaware of the growing threat to their lives by the return of an old enemy, Royal Pain. Events culminate at the Sky High prom, where Will and his friends must use their combined abilities to save his parents and the school itself.

In addition to the above-mentioned scenes, there are some scenes that could disturb children under the age of five, including:

Some children in this age bracket could be concerned by some of these scenes, particularly the following scenes:

There are no scenes that would be scary for children over 13 years old.

There is a little coarse language, and some name calling, including:

The main messages from this movie are that everyone can be ‘the hero” ,that everyone’s contribution is valuable and accepting people for who they are.

Parents could take the opportunity to discuss with their children what their own family’s values are, and what the real life consequences can be of bullying, lying, disobeying parent’s rules and fighting. Some teenagers could also benefit from a discussion of the movie’s themes of popularity, peer groups and first romances.