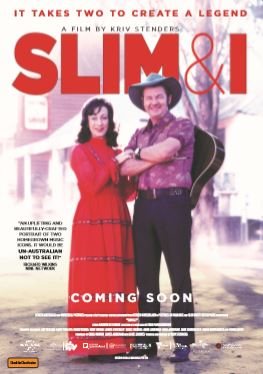 Not suitable under 8; parental guidance to 10 (themes, possible lack of interest)

Slim & I is a documentary about the lives of Slim Dusty and his wife Joy McKean, as told from Joy's perspective. Joy McKean was a well-known country singer who sang with her sister Heather as the McKean Sisters, long before she met Slim. As a child, Joy contracted polio, which left her paralysed in one leg and meant a long period of three years of separation from her parents and family. Joy credits this experience with giving her a determination and ambition that she otherwise might not have had. She was, additionally, a very talented song writer who wrote most of the songs that made Slim Dusty famous.

Joy met Slim at a show in which they were both performing, and they fell in love and married at a young age. Slim and Joy had two children, Anne and David, whom they took with them everywhere they went on a travelling roadshow. They spent 8 months of the year travelling to various country and remote towns, including many Aboriginal settlements, where they were well loved. Many contemporary country artists are featured in the movie, singing Joy's songs including Keith Urban, Kasey Chambers and Missy Higgins. During his life, Slim recorded 107 albums and was the longest recording star for EMI – over 60 years. Joy McKean is now ninety years old and still writing music.

Music; Life on the road; Separation from parents.

There is occasional coarse language in this movie, including:

Slim & I is a biographical documentary which includes a lot of archival footage from the early lives of Slim Dusty and his wife Joy McKean. The film includes interviews with Joy and her sister Heather, as well as many contemporary country music singers and commentators. Slim and Joy brought a lot of happiness to many people and while this might have come at the expense of others, they will leave a much treasured legacy in the history of Australian country music. Due to the nature and content of the movie, the film is not suitable for children under 8 and parental guidance is recommended for ages 8 – 10.

The main messages from this movie are to follow your dreams at all costs and that success requires a lot of hard work.