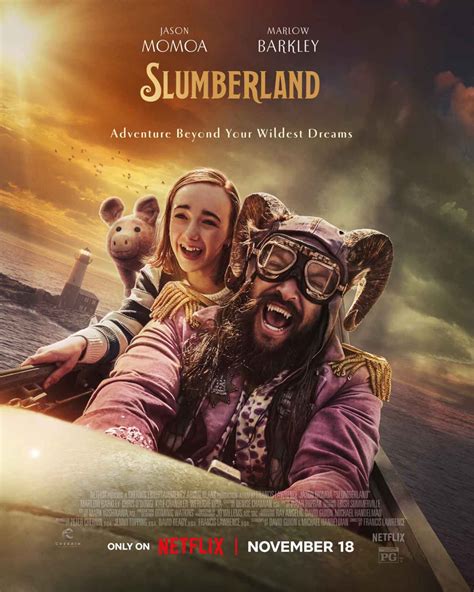 Not suitable under 9; parental guidance to 13 (violence, themes, scary scenes)

Nemo (Marlow Barkley) lives in a lighthouse with her father (Kyle Chandler) on a remote, rocky outpost in the middle of the sea. She knows everything there is to know about sailing, lighthouses and life on the ocean. Every night her devoted dad tells her stories about the adventures he used to have with his roguish partner, Flip (Jason Momoa), until one night he sets out on a rescue mission and never returns. Suddenly orphaned, Nemo is sent to live with her Uncle Philip (Chris O’Dowd), a boring man she had never met, who sells doorknobs and lives alone. Each night, fighting off unbearable grief, Nemo finds herself in ‘Slumberland’. It is here that she encounters Flip and learns of a secret map that will lead her to magical pearls, capable of granting the bearer any wish they may desire. Wanting nothing more than to see her father again, Nemo convinces Flip to take her with him to the Sea of Nightmares, where the pearls are rumoured to be hidden. Together they must navigate a universe of dreams, each more dangerous than the last, all the while trying to avoid Agent Green (Weruche Opia) who has been trying to apprehend Flip for years; and trying to outrun a nightmare that smells fear and seems determined to find Nemo wherever she may be.

Slumberland is a fantasy adventure, full of twists and turns. The film, which is based on an early 20th century comic strip, largely takes place in the ‘sleep state’ and gives the impression that dreams are sent to guide and help us, even when it doesn’t seem that way. While not for younger children, this film is likely to appeal to families with tweens and younger teens.

The main messages from this movie are that being brave isn’t about not being scared, it is about doing what you have to do even when you are afraid; that you must not let grief or death change who you are or rob you of living your life; and that you should not forget how to dream, and never lose your sense of wonder.