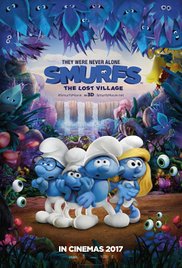 Smurfs: The Lost Village is an action-packed animated adventure film that is based on the original Smurfs comic book series. The Smurfs live in a peaceful village in the forest. Smurfette  (voice of Demi Lovato) is the only girl in the village, and is not sure what her purpose in life is supposed to be. One day, when she is out Smurf-boarding in the forest with her four friends, Clumsy Smurf (voice of Jack McBrayer), Hefty Smurf (voice of Joe Manganiello) and Brainy Smurf (voice of Danny Pudi), Smurfette is captured by the evil wizard Gargamel (voice of Rainn Wilson).

Gargamel has a plan to catch as many Smurfs as he can to harness their magical powers for his own evil deeds. Smurfette and her friends manage to escape back to the village. Although they are home safe, they feel it is their duty to go on a mission to the Lost Village to tell the other distant Smurf community that they may be in danger. They’ve never travelled so far. It is a perilous adventure and a big surprise awaits them when they finally find the Lost Village.

This movie has a strong theme of female empowerment and there are some good female characters, however it is very gender stereotypical (Smurfette takes on the whole adventure in her high heels, for example).   Other themes include not fitting in to your community and being different

There is some animated, slapstick violence in this movie including:

Younger children in this age group may also find some of the above scenes scary or disturbing and parental guidance is recommended.

Nothing of concern in the movie, but plenty of associated merchandise.

There are some mild sexual references and innuendo in this movie as well as some mild crude humour, including:

Smurfs: The Lost Village is an enjoyable action adventure with a strong female empowerment message. The animation is colourful and visually exciting. There are some scary scenes and characters, so it is not recommended for very young children and parental guidance is recommended for children aged 5 to 7.

The main messages from this movie are that it’s OK to be different, the importance of team work and looking out for your friends and community.

Parents may wish to discuss the gender stereotypes portrayed in the film.