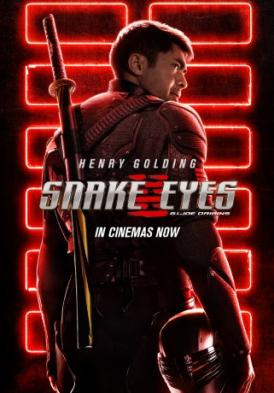 Not suitable under 14; parental guidance to 16 (violence, themes, language and scary scenes)

A young boy watches his father die and swears vengeance on the man who killed him. As an adult, this boy calls himself Snake Eyes (Henry Golding) after the roll of the dice that ended his father’s life. Working as a street fighter for a living, he takes quite a beating but always triumphs over his opponent. Snake Eyes is soon sought out by a man called Kenta (Takehiro Hira) who offers to track down and deliver his father’s killer. Kenta appears to be recruiting an army of assassins to help him defeat an archrival but Snake Eyes refuses to be a common killer and saves the rival, Tommy’s, life instead. Wishing to pay back the debt, Tommy (Andrew Koji) takes Snake Eyes to his home in Japan where he is next in line to lead a famous clan of Ninja warriors sworn to protect a precious gem with infinite power. Tommy would like Snake Eyes to join them and become a protective warrior as well but in order to do so Snake Eyes must pass three dangerous tests, all designed to reveal if he possesses a pure heart in addition to the skills of a Ninja. Snake Eyes feels the pull towards a home and a family that he never had but perhaps even greater than his wish to belong is his desire for revenge. When Kenta teams up with the evil Baroness (Ursula Corbero) to steal the gem and destroy Tommy and his clan, Tommy enlists help from his old friends the Joes, who give Snake Eyes a new perspective and help him see that there is a greater enemy than the man who ended his father’s life.

Revenge; Murder of a parent; Good versus evil; Violence as a means to solve conflict; Traditional values versus New Age thinking.

Snake Eyes: G.I. Joe Origins is an action adventure film with a fast paced, albeit predictable, plot. A prequel to the previous G.I. Joe films, based on two of the comic series' main characters and filled with violence, this is not a family movie but rather one that will be best enjoyed by fans of the franchise and mature audiences. Not suitable under 14 and parental guidance to 16.

The main messages from this movie are that power comes from discipline and that we all make mistakes – it is what we do afterwards that really matters.