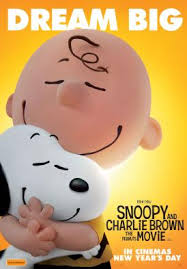 Parental guidance recommended under 6; suitable for 6 year olds and over (comedic violence and some scary scenes)

Snoopy and Charlie Brown: The Peanuts Movie is an animated comedy film that follows Charlie Brown (Noah Schnapp) and Snoopy (Bill Melendez) as they both try to accomplish their dreams. Charlie begins the film by going about his regular activities, delighting in ice skating with friends, planning for the upcoming baseball season, and generally enjoying life. However, when he meets the new arrival to the neighbourhood, the Little Red-Haired Girl (Francesca Capaldi), he becomes smitten and develops a crush on her. Charlie soon embarks on a quest to discover activities that might cause the Little Red-Haired Girl to notice him – he attempts to perform at the winter dance, writes a novel, enters a talent show, etc. Over the course of the film, accident-prone Charlie runs into many obstacles in his quest to impress the girl of his dreams. He is helped along the way by his friend Snoopy, who is on his own journey to become a World War 1 pilot legend.

In addition to the above-mentioned violent scenes, there are several scenes in this movie that could scare or disturb children under the age of five, including the following:

There are very mild sexual references, including:

There is very mild sexual activity, including:

There is mild use of substances in the film, including:

There is mild coarse language in the film, including:

Snoopy and Charlie Brown: The Peanuts Movie is a hilarious yet touching film about friendship, confidence and achievement. The movie explores self-esteem issues through Charlie’s character – he often talks himself down, and has very little faith in himself and his own abilities. However, through much trial and error, he learns that other people accept and love him for who he is. The film also highlights the importance of friendship, and how much of a positive and significant impact friends can make to a person’s life.