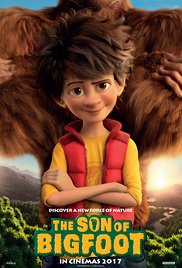 Not recommended under 11; parental guidance recommended 11-13 due to themes, coarse language and violence.

Thirteen-year-old Adam (voice of Pappy Faulkner) is a loner who is the target of bullies and is described by school officials as having “mid-level acquaintance deficiency”.  He has certain wildness about him, and lately strange things have been happening to him. Adam’s feet spontaneously grow, causing his toes to pop out of the ends of his shoes, his has super-hearing, and his hair, when cut, regrows overnight to be long and unruly in the morning.

Adam’s life takes an unexpected turn when he discovers letters hidden by his mother and written by his supposedly dead father. Upset that his father’s death was a lie and determined to find him, Adam runs off to the address on the letters which leads to a forest. In the forest a near fatal accident results in Adam being rescued by Bigfoot, who turns out to be Adam’s father (voice of Christopher L. Parson). Bigfoot faked his own death in order to escape the giant corporation HairCo and has been hiding out in the forest ever since.

Reunited Adam and his father form a relationship and Adam learns how to use his new powers. Their happy time together turns into a rescue mission when the people at HairCo discover that Bigfoot is still alive.

The film contains physical violence, some of which has a comical intent, but also school bullying and harassment, gun-related violence, and intimidation. Examples include:

A scene depicts a pregnant raccoon with an extended stomach and there is a discussion about the suspected sex of the soon-to-be-born racoons.

The film contains some coarse language and name-calling that younger children may imitate scattered throughout. Examples include:

Son of Bigfoot is an animated comedy with a simple story line and lots of action. It is likely to be particularly enjoyed by a young male tween and teen audience although some of the themes are more suited to a slightly older audience. Because of these themes, violence and coarse language the film is not recommended for children under 11.

Parents may also wish to discuss the behaviour of the bullies depicted in the film, the way that the school deals with this behaviour and the lack of real consequences..