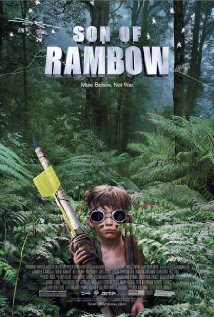 Not recommended under 12, PG to 15 (Violence, Themes, Coarse language)

Son of Rambow is set in England in the 1980s and tells the story of an unlikely friendship.  Will (Bill Milner), whose father died of an aneurysm, belongs to a strict Christian sect that forbids contact with outside influences such as television, music and friends outside the sect.  In contrast Lee Carter (Will Poulter), who has been abandoned by his mother and father and left with his uncaring older brother, has an existence of excessive freedom.
The two boys find that they have more in common than expected as they join forces to create a home movie worthy of winning the BBC junior-filmmaker contest.  Lee is armed with plenty of ambition and a video camera when he accidentally stumbles upon the prolific creative talents of Will and convinces him to screen test for his movie adventure.  Will is easily enticed into Lee’s world of rebellion and freedom. When he accidentally views Lee’s pirated copy of Rambo: First Blood his imagination goes wild with the creative possibilities.
What follows is a comedic adventure as the boys’ imaginings, drawings and daydreams come to life through the story of Son of Rambow. They start to make a name for themselves at school as movie makers but, as popularity descends on them, they find their friendship and movie are put to the test.

There is some violence and accidental harm in this movie, including stunts which parents may be concerned that children may imitate. Violence includes:

It is unlikely that children in this age group will understand that many of the humorous stunt scenes and violent attacks by scary characters exist only in Will’s imagination and as a part of the film they are making.  Therefore they may find some of the images of fighting and killing scary

It is unlikely that children in this age group will understand that many of the humorous stunt scenes and violent attacks by scary characters exist only in Will’s imagination and as a part of the film they are making.  Therefore they may find some of the images of fighting and killing scary

There are some rude gestures and coarse language in this movie, including:

Son of Rambow is a comedy about friendship and growing up. The main messages from this movie are the meaning of true friendship: loyalty, trust and forgiveness
This movie could also give parents the opportunity to discuss with their children attitudes and behaviours, and their real-life consequences, such as: