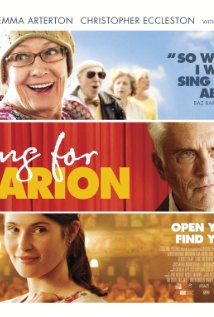 Not recommended under 12, PG to 14 (Themes; Lack of interest)

Song for Marion stars Terence Stamp as Arthur, a grumpy, misanthropic pensioner who has trouble understanding why his wife Marion (Vanessa Redgrave) would want to embarrass herself by singing as part of an elderly choir group. As Marion’s health deteriorates and she loses her battle with cancer, Arthur tries to accommodate the wishes of his wife and frequently takes her to choir practice, opting to isolate himself outside and smoke in a secluded area during their rehearsals. However, choir director Elizabeth (Gemma Arterton) appears to see something beyond Arthur’s cold exterior, and refuses to give up on encouraging him to participate.

After Marion dies, Arthur realises that change is indeed possible for him. He joins the choir, trying hard to let go of the long-standing bitterness and anger that he has used in the past to protect himself from getting close to people, including his estranged son James (Christopher Eccleston).

When a long-awaited singing competition takes place and the choir is told they will not be allowed to sing, Arthur takes action.

There is one scene in this movie that could scare or disturb children under the age of eight:

There were few sexual references in this movie, including:

Song for Marion is a heart-warming film that highlights the difficulties that come with change and ageing. Arthur is a man who has shut off his emotions in an attempt to cope with the imminent death of his wife, but has lost sight of what it really means to live. After she dies, he begins to realise that he has to change his ways, or he risks living in isolation and misery for the rest of his days.

The film lacks interest for children and its themes of ageing and terminal illness make it more suited to adults. Younger children may be upset by scenes of Marion’s death.