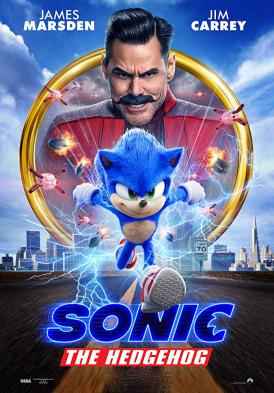 Not suitable under 6; parental guidance 6-8 (frequent action violence, reckless behaviour, some alcohol use)

Sonic the Hedgehog (voiced by Ben Schwartz), known from the iconic Sega video game series, has incredible super powers: he can run at supersonic speed, turn into a spin ball creating impact similar to a missile, and generate bolts of electricity. His powers, however, also mean that villains are after him. In order to protect him, Sonic’s guardian helps him escape from his home planet to Earth, advising him to stay hidden. Sonic finds himself in the remote Montana country town of Green Hills. For about 10 years Sonic manages to keep a low profile but he struggles with living in the shadows and feeling lonely. One night he gets particularly frustrated and accidentally releases a power surge that causes a nationwide blackout. Mystified, the US military hires notoriously crazy but ingenious scientist Dr. Robotnik (Jim Carrey). Dr. Robotnik soon finds out that the creature he is after is a source of incredible power so wants to capture him to revolutionise his army of drones and robots. Sonic turns to his favourite human, local police officer Tom (James Marsden), for help, and soon the unequal pair are on a road trip getting into all sorts of trouble and mischief.

Friendship; good versus evil; finding out where one belongs and finding one's place and purpose in life.

There is some substance use in this movie:

Likely to appeal to a family audience with children over 8, Sonic the Hedgehog is an action comedy centred around the famous Sega video game character. Jim Carrey shines as a crazy scientist / villain, creating many humorous scenes. Frequent action violence and some reckless behaviour warrants this animated movie unsuitable for children under 6 with parental guidance recommended to 8.

The main messages from this movie are that everybody needs a friend, and that everyone needs to find a place to call home.