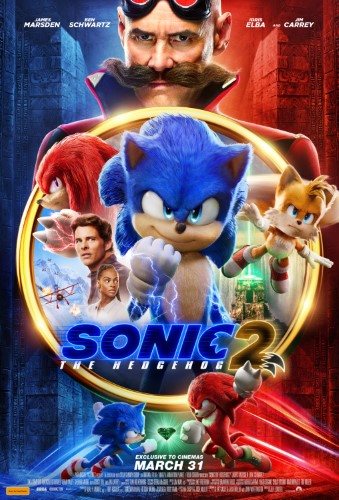 Marooned on a distant, fungi filled planet, Dr Robotnik (Jim Carrey) has been biding his time while he hatches plans for revenge on Sonic (voice of Ben Schwartz). Finally able to free himself, he heads back to Earth with a new partner, named Knuckles (voice of Idris Elba), who has spent his life looking for a lost emerald that he believes Sonic holds the key to finding. Meanwhile, Sonic is living it up in Green Hills, Montana with the town’s sheriff Tom (James Marsden) and his wife Maddie (Tika Sumpter), while simultaneously trying to make it as a self-named super hero called Blue Justice. Sonic’s plans of being a hero repeatedly backfire, often ending with unhappy, albeit safe, people and lots of property damage. When Tom and Maddie head to Hawaii for their friend Rachel’s (Natasha Rothwell) wedding, Sonic promises to look after the place and stay out of trouble. As Dr Robotnik and Knuckles make their appearance, Sonic is assisted by a furry friend from afar, named Tails (voice of Colleen O’Shaughnessey). Together they learn of the lost emerald, the power it holds and how to find it. They set off on a mission to keep it safe, with Dr Robotnik and Knuckles hot on their trail. When Sonic desperately crashes Rachel and Randall’s (Shemar Moore) wedding, he and Tails are captured and it looks like Knuckles and the evil Dr will win, until Sonic teams up to become the hero he has always hoped to be.

Sonic the Hedgehog 2 is a sequel to the movie based on the Sega video games. There are numerous special effects and while the plot is fast paced it is also very predictable. This is a film for families with slightly older children that will be especially appreciated by Sonic fans.

The main messages from this movie are that anyone can be a hero but that we do not choose the moment – the moment chooses us.