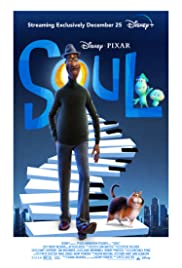 Not suitable under 8; parental guidance to 10 (adult themes)

Joe Gardener (Voice of Jamie Foxx) is a high school band teacher with fading dreams of becoming a jazz musician. On the same day that he lands a top gig with a famous jazz musician, Joe’s fortunes twist and he tumbles down an open manhole, plunging him into an alternate reality where his soul is climbing on an escalator towards a bright white light; he is dying. In desperation, Joe tries to run back to his body and somehow ends up in a psychedelic and ethereal land called, “The Great Beyond”, which is where new, unborn souls are being prepared for their birth on Earth. Joe has somehow arrived there by accident and is mistakenly assigned as a mentor to one of the unborn souls, soul number 22 (voice of Tina Fey). Joe’s job is to help this little soul find her ‘spark’ so that she can begin her journey towards life on Earth. The catch is that soul number 22 doesn’t want to live and has no desire to find her spark – many mentors have tried to help her and failed. Joe admits to 22 that all he wants to do is find a way back into his body and continue living. This intrigues number 22 as his life seems so sad and ordinary to her, she can’t see why he is so attached to life. She agrees to help him get back to Earth. They begin a topsy turvy adventure between realities which involves a bit of body swapping with a cat, some misadventures on Earth and ultimately, some realisations about what our true purpose in life is.

There is some mild slapstick violence in this movie, including:

Soul is a warm-hearted and compelling film with delightful visual animation. It is very enjoyable to watch, but lacks a coherent and cohesive storyline, which may leave both adults and children wondering what the film is actually about. Apart from a couple of dramatic and emotional scenes, there is not much in this film that small children would be scared by, however parents should be aware that this film explores quite mature concepts that may confuse some children and require an explanation. It is therefore not suitable for children under 8 and parental guidance is recommended to 10.

The main messages from this movie are that it is important not to take our life for granted, to appreciate the simple pleasures of life and not be caught in the trap of ambition.