Space between us, The 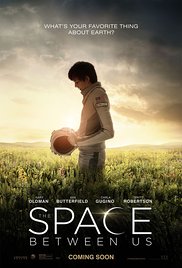 The space between us is a science fiction romance that follows the story of Gardner (Asa Butterfield), the first human born and raised on a NASA space station. Gardner's mother had been an astronaut who was unaware that she was pregnant when she set off on a mission to Mars and died giving birth to her son. It was decided by the CEO of Genesis, Nathaniel Shepard (Gary Oldman), that Gardner should secretly remain on Mars with the rest of the crew in order to avoid an inevitable PR disaster.

The film picks up the story sixteen years later, at which point Gardner has grown into an inquisitive and bright teenager who has only ever had social interactions with the other fourteen crew members. Hoping to learn more about his mother, he hacks into the robot known as Centaur in order to access the ship's storage. After locating his mother’s belongings, he finds items which lead him to think he may be able to track down his biological father.

At the same time, Gardner begins to develop an online relationship with a girl via an internet chat room. In the hopes of meeting Tulsa (Britt Robertson), Gardner begins to plan a trip to Earth. Ignoring medical advice indicating that he may be physically unable to survive Earth's atmosphere, Gardner sets off to find both Tulsa and his father.

Space exploration and isolation; death of a parent; teenage friendship and relationships; search for family

In addition to the above-mentioned violent scene, there are some scenes in this movie that could scare or disturb children under the age of five, including the following:

There is mild sexual activity, including:

The space between us is an inspiring film about taking chances, developing human relationships, and remaining true to oneself. After having grown up socially isolated, as a teenager Gardner longs to form meaningful connections with others. The film highlights that when something is valued enough, there are no limits as to how far individuals may go to see their dreams realised.

The film’s story about the death of a mother in childbirth, a teenager growing up in isolation then searching for his father, and teenage romance, makes it more suitable viewing older teens. It is not recommended for children under 14, with parental guidance recommended for 14 year olds.

Other issues that parents may wish to discuss with their children include: