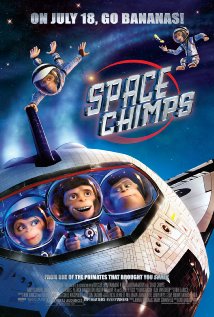 Not recommended under 8, PG to 10 (Violence, disturbing scenes)

Ham III (voice of Andy Samberg) feels unable to live up to the legacy of his grandfather Ham I, the famous first chimp in space, and fritters his life away as a daredevil cannon ball in a circus act. However, his life is soon to change abruptly.
When a US space probe is sucked into a wormhole and lands on a planet on the other side of the universe, scientists and aeronautical experts decide to launch a mission to test whether a human could survive the force of the wormhole and to find out if there is life on the new planet. Unable to risk human lives on the mission, they use chimps instead. The Space Chimp program had long since been abandoned, but several chimps had been kept on ‘for show’. Luna (Cheryl Hines), Titan (Patrick Warburton), Comet (Zack Shada) and old Houston (Carlos Alazraqui) have been grooming themselves for a mission, learning far more than the scientists realized.
To inspire public confidence and to boost his approval ratings, the senator promoting the mission insists that a handsome hero-type go too, and preferably a descendant of Ham I. The reluctant Ham III is therefore carried off to join the Space Chimps and Comet and Houston are left behind.
Meanwhile, on planet Malgar, the cruel dictator Zartog (Jeff Daniels) has learned how to use the probe and has either enslaved all the inhabitants of that world, or has frozen them in fresnar a silvery lava in which only their eyes can move and from which, allegedly, they can never escape.
In space, Ham’s daredevil behaviour jeopardizes his fellow crew members numerous times, but once they land on the planet and encounter various hostile forces Ham’s crazy antics, with help from Comet and Houston on earth, repeatedly save them.

The movie contains slapstick violence and accidental harm with no death or injury shown, including

Children in this age group may also be disturbed by some of the violent and scary scenes described above.

Younger children in this age group may also be disturbed by some of the violent and scary scenes described above.

There is some coarse language in this movie, including:
“kicked his butt’, “oh my lord”
name calling such as “dork”, “circus freak”, “jerk boy”, “poop-thrower”

Space Chimps is an animated science fiction adventure aimed at children but full of chimpanzee puns, silly jokes and adult humour. The main messages from this movie are to be true to yourself and to follow the right path but to do it your own way.
Values in this movie that parents may wish to reinforce with their children include creativity, tolerance, and justice.