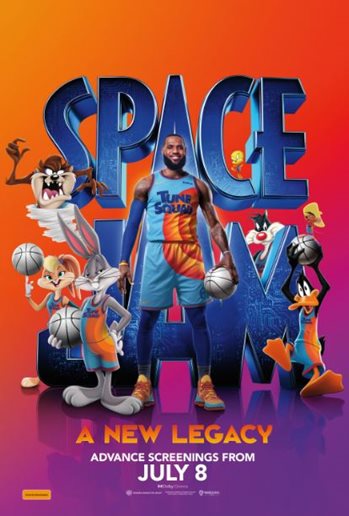 Not suitable under 7; parental guidance to 10 (scary scenes)

Space Jam: A New Legacy is a stand-alone sequel to the 1998 film, Space Jam. Like the original, this sequel is a mix of live action and animation and stars famous NBL Basketball player, Le Bron James, as well as the original Warner Brothers Looney Toons characters (Bugs Bunny, Tweety Bird, Daffy Duck, etc.). In this reboot, Le Bron James (playing himself) and his 12-year-old son, Dom (Cedric Joe), are having some relationship issues. Dom is a talented video game designer, who has created an amazing and very popular online basketball game. Le Bron doesn’t understand why Dom can’t just be into playing real basketball and isn’t impressed. One day, on a trip to the Warner Brothers’ studios, the two become trapped in the digital world of the Warner Brothers’ computer server. They have been sucked into the server by a rogue AI character called AI-G Rhythm (Don Cheadle) who wants to trap Le Bron inside the server forever. AI-G Rhythm offers them the chance to return to real life, but only if Le Bron can defeat his son in a basketball match. The only catch is that the match will be played according to the rules of Dom’s videogame version of basketball. Le Bron is sent off to the Looney Toon ‘planet’ to assemble a basketball team and prepare for the game, whilst Dom (who has no idea that if he wins, he and his father will be stuck in the server forever) is coached by AI-G Rhythm to create the meanest and most talented line-up of digital basketball players that he can. When it’s finally time for the game, the stakes are suddenly higher than they originally thought.

Space Jam: A New Legacy is a light and easy film that is likely to appeal mostly to children in the 8-10 age bracket, especially those who are aspiring basketball players or game designers. The seamless mix of animation, live-action and CGI is quite impressive and there is enough humour and nostalgia to keep adults interested. Le Bron James is great in this role, not only as a basketball player, but a loving father who must learn some lessons on how to be a good Dad. Many children will be able to empathise on some level with Dom’s frustration that his dad just doesn’t understand his passions!

The only frustrating thing with this film was the blatant and constant cross-promotion of other Warner Brothers’ products, some of which are entirely unsuitable for advertising to children, such as the R-rated TV series, Game of Thrones.

The main message from this movie is that we need to appreciate that everyone has their own set of strengths and weaknesses – someone else’s talents might not be like our own, but that doesn’t mean they are any less valuable.