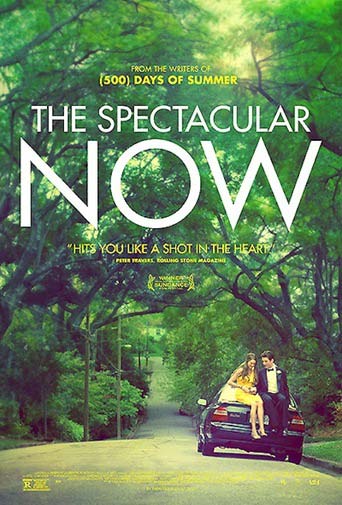 Sutter Keely (Miles Teller) is a high school student enjoying life in the fast lane in the ‘spectacular’ now. He has no interest in the future and is already an alcoholic. He wakes one morning after a drinking binge on the front lawn of a house to find Aimee (Shailene Woodley) looking down at him. Aimee also attends the same school as Sutter and is aware of his reputation. Although she is very different from other girls in that she is a very natural, hardworking student who loves science fiction, Aimee and Sutter are drawn to each other.

Sutter decides that it’s his role in life to draw Aimee out of herself and so overwhelms her with flattery and his ever present hip flask. Aimee likes the attention and somehow the two help each other confront many of their social issues particularly their problems. Despite his obvious flaws, Sutter has a good heart and is well meaning to all of his friends. He also idolises his absent father but eventually discovers why his mother has kept him from meeting him for so long.  This has quite a devastating impact on Sutter.

Coming of age; alcoholism; death of a parent; absent fathers

There is not much violence in this movie however in one scene:

Apart from the scene above, there is nothing that would particularly scare children in this age group.

Apart from the scene above (see violence), there is nothing that would particularly scare children in this age group.

There is quite a lot in this movie that could disturb children in this age group. It’s a very gritty, realistic movie about teenage life, sex and alcohol fuelled parties.

The Spectacular Now is a very honest and realistic drama about teenage life and the problems faced by teens during these difficult years. It is well acted and thought provoking, although it doesn’t sufficiently address the alcohol problem of the lead character. The movie’s themes, in particular, make it better suited to older, more mature teens and parents of younger children may also be concerned about the coarse language and sex scenes.

The main message from this movie is that living for the moment doesn’t usually take other people’s feelings into account.