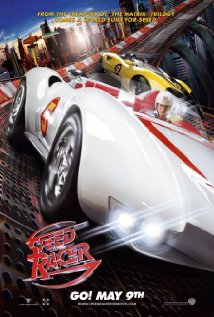 Not recommended under 10, PG to 13 due to violence, disturbing scenes, themes and coarse language.

Life for Speed changes dramatically when E.P. Arnold Royalton (Roger Allam) the owner of Royalton Industries (makers of car engines) offers Speed a place on his race team. When Speed refuses, Royalton turns nasty, revealing that all races are fixed to profit powerful corporations. Royalton informs Speed that unless he signs with Royalton industries he will never be allowed to win a race and that his career, family and life will be at risk.

Speed is approached by Inspector Detector (Benno Furmann) of the CIB, and asked to join forces with Racer X (Matthew Fox) and a Japanese racer Taejo Togokhan (Rain) to enter the gruelling Casa Cristo race in an attempt to expose Royalton’s illegal race fixing activities.

Corruption in the world of car-racing

Speed Racer contains frequent stylised action-violence, much of it on the race track. There are frequent scenes of cars crashing, including cars flying through the air and bursting into flames. Examples of violence include:

Children in this age group may also be disturbed by some of the violence and scenes described above.

Speed Racer, based upon the late 1960’s animated TV show, is a stylised action car racing film which targets a young adult and older adolescent male audience. The film runs for 2 hours and fifteen minutes, and may be too long for younger viewers.