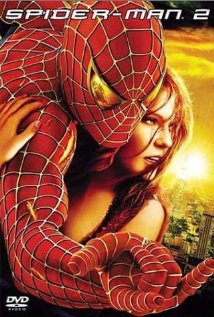 Parker is a university physics student, who, in connection with a University assignment, is introduced to his idol Dr. Otto Octavius; a brilliant scientist currently working on a fusion project designed to produce cheap clean power. To handle the dangerous materials in the fusion experiment, Dr. Octavius fuses to his spinal column four artificially intelligent mechanical tentacles. The tentacles are governed by a control chip preventing the tentacles from taking control of Octavius’s mind. However, a trial experiment goes drastically wrong—Octavius’s wife is killed and the chip controlling the cyber-intelligent tentacles is destroyed. The tentacles take control of Octavius’s mind and he is transformed into Doc Ock, a sinister Cyborg capable of throwing people and cars around as though they were toys and killing without remorse.

Octavius, or Doc Ock, goes to rob a bank, where by coincidence, Peter Parker and his Aunt May are doing some banking. Parker does battle with Doc Ock and saves Aunt May, but after the fight, his powers appear to abandon him. Peter decides to forgo his life as a super hero, throws away his costume and for a time resumes a normal life. However, he soon learns that he is unable to turn his back on those in need; gains back his super hero powers and once again dons his spider costume.

Meanwhile, Doc Ock makes a pact with Harry Osborn to capture Spider-Man in return for some Tritium required to fuel the experiment. Osborn wishes Spider-Man great harm in retaliation for his father’s (the Green Goblin) death. Doc Ock captures Mary Jane Watson to use as bait, captures Spider-Man and hands him to Osborn in exchange for the Tritium. Osborn unmasks Spider-Man, but on finding the super hero to be his best friend Peter Parker, he is unable to kill him.

Peter convinces Osborne that bigger issues are at hand, and Osborne then lets him go to rescue Mary Jane. Spider-Man arrives to find Mary Jane chained to a post and Doc Ock in the midst of a second experiment gone haywire. He must then try to save Mary Jane and New York from Doc Ock’s latest experiment.

The violence portrayed by both super-hero and villain is nearly always successful and glamorised. The super hero is young and physically attractive, and the villain is presented as very powerful and intelligent.

In terms of both super hero and villain, there are no real life consequences resulting from violence, neither receives so much as a scratch wether falling off of a skyscraper, or being run over by a car, the worst result is a torn costume. The same cannot be said for the non-hero type. Dr. Octavius’s wife along with hospital staff are killed, however, even though people are thrown around like rag dolls and hurled against brick walls, not a drop of blood is seen on screen, nor none of the resulting injuries that you would expect to occur.

At times, the consequences of violent acts are presented in a comical manner. For example, when aunt May is dropped by Doc Ock off of a New York skyscraper, she plummets to the ground, but some how manages to escape death by attaching herself to a statue via her umbrella. And when the umbrella finally gives way, aunt May begins to plummet to the ground only to find a ledge inches from her feet.

Male characters carry out all of the violence presented in Spider-Man 2, even those that are not super heroes with the victims mostly female. Victims of violence receiving the most on screen time include Aunt May and Mary Jane.

Frightening visual images of most concern to children under the age of five years are:

Younger adolescents in this age group may still have trouble with the scary scenes mentioned above. As the level of graphic on screen violence is minimal (no blood or gore), children fifteen years of age and over should be able to cope with the violence in Spider-Man 2.

There are no sexual references in Spider-Man 2.

There is no nudity or sexual activity in Spider-Man 2.

During one scene, Peter Parker’s friend, Harry Osborn is seen consuming alcohol and appears to be intoxicated. As a result of the intoxication, Harry becomes aggressive towards Peter, verbally abusing him and slapping him several times across the face.

There is no coarse language in Spider-Man 2.

Besides the very obvious message of good triumphing over evil, there are a number of positive take home messages that parents may wish to encourage including: