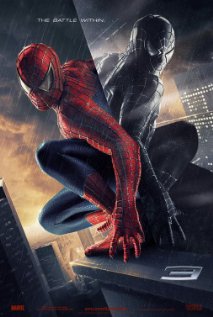 Spider-man 3 begins with Peter Parker/Spiderman (Tobey Maguire) and Mary Jane Watson (Kirsten Dunst) happy together. However, a small meteor crashes to Earth bringing a sinister black oily creature, which attaches itself to the back of Peter’s motorbike and ends up in his apartment.
Soon Harry Osborn (James Franco) as Green Goblin junior attacks Spider-man. The battle results in Harry being knocked senseless and losing his memory. Peter and Harry resume their old friendship with Harry having no memory of his Green Goblin alter ego.
The next nemesis Spider-man encounters is Flint Marko (Thomas Haden Church), an escaped convict, who turns out to be the real killer of Peter Parker’s uncle Ben. While attempting to evade capture, Flint stumbles into a particle physics test site and is transformed into the giant Sandman. Flint then embarks on a crime spree stealing money to buy his dying daughter medicine, with Spider-man thwarting his efforts at every turn.
Meanwhile the sinister black creature attaches itself to Spider-Man to exaggerate his worst characteristics. After alienating himself from everyone he cares about, Spider-man finally realises that he is in the grip of an alien entity and rips it from his body. Unfortunately for Spider-man, the creature lands on, and joins with, a disgruntled photographer named Eddie Brock (Topher Grace), to become arch-nemesis, Venom.
In an effort to destroy Spider-man, Venom teams up with Sandman and they kidnap Mary Jane. With Harry’s help Spiderman is able to overpower the Sandman, destroy Venom and save Mary Jane.

While Spider-Man 3 features a large amount of stylised comic book violence but some of this violence is extremely brutal in nature. Examples included:

Children in this age group are also likely to be disturbed by the scenes described above. .

Children in this age group are also likely to be disturbed by a number of the scenes described above, particularly those involving Venom.

Most children over 13 are unlikely to be disturbed by the images described above but parental guidance is recommended.

Spider-man 3 is a comic book style superhero movie with spectacular special effects which will appeal to a teenage male audience.

The main messages in Spider-Man 3 relate to Spider-Man’s identity crisis. It is from Peter’s self-doubts and insecurities that his darker side arises when the alien black creature becomes attached to him, and he must overcome self doubt to defeat Venom.  Younger children may need explanation of the uncharacteristic behaviour of the superhero while he is in the creature’s clutches.

Values in this movie that parents may wish to reinforce with their children include forgiveness.

This movie could also give parents the opportunity to discuss with their children the manner in which the film represents women as helpless victims in need of rescue by male heroes, and the film’s representation of unequal gender roles. Parents may also wish to discuss the manner in which all conflict depicted in the film was resolved through the use of violence.