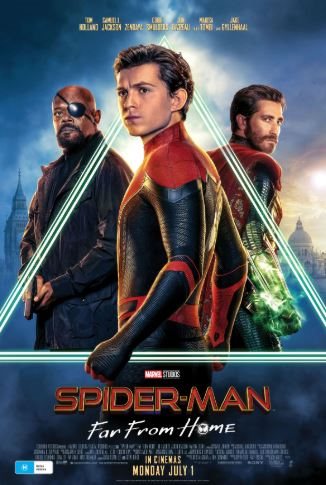 Not suitable under 8, not recommended 8-11, parental guidance to 12-13 (action violence, supernatural themes)

Following the events of Avengers: Endgame, Peter Parker/Spider-Man (Tom Holland) and his friends MJ (Zendaya), Ned (Jacob Batalon), Betty (Angourie Rice), and their classmates go on a class trip to Europe.  Meanwhile, Nick Fury (Samuel L Jackson) and Maria Hill (Cobie Smulder) begin investigating strange natural disasters that appear to be otherworldly.  When the kids’ school trip is invaded by giant monsters, Peter is forced to team up with Mysterio (Jake Gyllenhaal), a mysterious new superhero who claims he is from another version of Earth.  As Peter tries to save the world again and work out how to tell MJ how he feels about her, Peter begins to realise that Mysterio may not be who he seems, and that he and his friends may be in more danger than he thinks.

Spider-Man: Far from Home is the second film in the recent reboot of the Spider-Man franchise.  This film is both consistently funny and touching, with strong performances from its central cast.  This film will likely be enjoyed by older children and adults.

The main messages from this movie include – Balancing your own needs with the needs of others, even if it feels like you are letting others down; Communicating with those around you when you need help or support, particularly when you are dealing with loss or hardship.